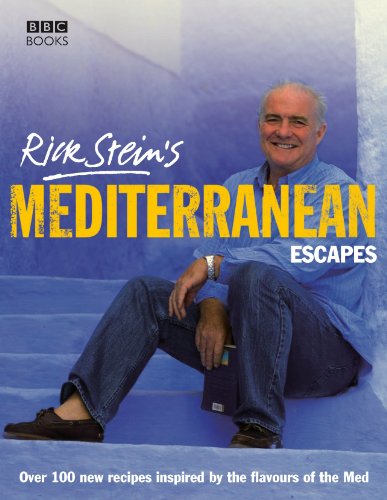 2007. Later printing. Hardcover. Mediterranean food is the simple cooking of simple ingredients. This book introduces with a diary of author's gastronomic journey, recounting the many interesting characters and interesting dishes he discovered en-route. It contains over 100 recipes divided by types of ingredient or types of dish - from mezze and tapas to calamari and couscous. Num Pages: 216 pages, 100 food and location pix. BIC Classification: 1QRM; WBB; WBN. Category: (G) General (US: Trade). Dimension: 281 x 224 x 20. Weight in Grams: 1156. . . . . . Books ship from the US and Ireland. Bookseller Inventory # V9780563493662

Approach the Mediterranean Sea from any direction and you know you've entered a different world. Rick Stein's culinary odyssey takes in both the islands and coast of this remarkable region. Travelling often by public ferry boat, and encountering extraodinary people along the way, Rick has sought out the very best of the region's food. This is a land where culinary trends are looked down upon. What matters is how good the lemons are this year and who is pressing the best olive oil. Rick's pick of more than 100 recipes includes Catalan Grilled Stuffed Mussels, Feta and Mint Pastries, Puglian Fava Bean Puree, Corsican Oysters with a Pernod and Tarragon Dressing, Moroccan Chicken with Preserved Lemon and Olives, Sicilian Orange Cake and Corfiot Rice Pudding. Fully illustrated with beautiful food photography by Earl Carter and landscape photography by Craig Easton, Rick Stein's Mediterranean is a fascinating journey into a rich and varied culinary heritage.

Rick Stein's passion for using good quality local produce and his talent for creating delicious flavour combinations in his books and restaurants have won him a host of awards, accolades and fans. As well as presenting a number of television series, he has published many best-selling cookery books, including French Odyssey, Coast to Coast, Far Eastern Odyssey and Spain. Rick is a firm supporter of sustainable farming and fishing techniques, which he strives to maintain in Padstow, Cornwall, where he runs four acclaimed restaurants and a seafood cookery school, as well as a delicatessen and patisserie. In 2003 Rick was awarded an OBE for services to West Country tourism. He divides his time between Padstow and Australia, where he opened a restaurant, Rick Stein at Bannister's, in 2009.