Items related to Rise Above! Letters from Tyrone Guthrie 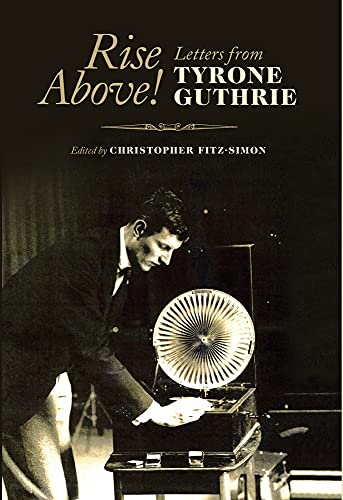 Rise Above! Letters from Tyrone Guthrie

Here, in a stunning volume of letters, we are offered a glimpse into the vision of this extraordinary impresario aswell as a view of the intimacies of his relationships with his mother, wife and friends.During the 1940s and 1950s Guthrie was renowned for liberating the plays of Shakespearefrom declamatory delivery and excessive staging. His most enduring legacy was in inspiringthe creation of modern theatre buildings where the plays of antiquity could be brought closerto the audience - such as at Stratford, Canada, and the theatre that bears his name inMinneapolis, USA. Of Scots-Irish parentage, he identified most closely with his mother's homeat Annaghmakerrig, Co. Monaghan, which he made his professional headquarters after herdeath, hosting producers, designers, playwrights and composers there while planningworldwide productions. On the advice of his sister Peggy and her husband, Hubert Butler, heleft this house to the Irish nation as a workplace for writers and artists.Faced with often seemingly insurmountable financial and personal disaster, his celebratedmantra 'Rise above!' was testament to a life lived in on the wings of an operatic opening nightor a Shakespearean tragedy. Guthrie's vivid descriptions of places visited are matched by theobservational skills of his remarks on the people he worked with, among them well-knownactors from Orson Welles to Alec Guinness. Family members come in for as many amusedcomments as do the famous and distinguished: Cousin Molly is no more spared than WinstonChurchill. Fitz-Simon has gathered an important, and entrancing, collection of TyroneGuthrie's letters, raising a curtain on the life of Ireland's leading theatre director of thetwentieth-century.

Christopher Fitz-Simon is a former Artistic Director of the Irish Theatre Company, the LyricTheatre, Belfast, and the Abbey Theatre, Dublin. He has lectured in Ireland, Britain, Canada,the US, South America and throughout Europe. Among his books are The Boys (2002), ElevenHouses (2007) and Buffoonery and Easy Sentiment (2011).