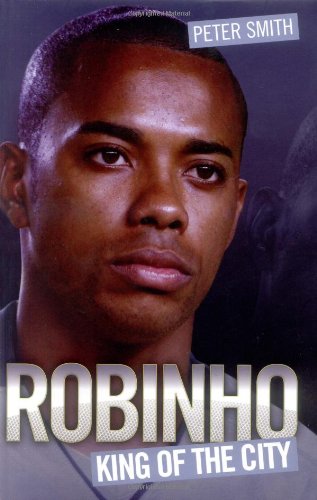 Robinho: King of the City

Synopsis: Born in a poor neighborhood of Sao Vicente, Brazil, in 1984, the young Robinho began playing soccer almost as soon as he could walk. At the age of six, he helped his local soccer academy team to win the championship in his first year, and at eight, he moved on to the indoor game known as futsal. Quickly snapped up by Brazilian club Santos, he signed professional forms at 17. His form brought him to the attention of top European clubs, but he would have to wait until 2005 for a move to giants Real Madrid. Robinho scored 14 goals in his first season in La Liga, but differences with the manager saw him spend most of 2006–7 on the bench. He fought his way back into the starting 11 and soon was the subject of intense transfer speculation, with Chelsea rumored to be on the brink of securing his signature. An incredible last-minute swoop by Manchester City stunned fans and commentators alike, and he scored his first Premier League goal on his debut just two weeks later. Robinho's style and Brazilian flair have reinvigorated the Manchester City side, and his goals have been invaluable to Mark Hughes's team.

About the Author: Peter Smith is a former senior writer for Sport magazine and has contributed to a number of newspapers, magazines, and websites including SkySports.com, NME, and City AM.

1. Robinho: King of the City

Book Description Hardback. Condition: Very Good. The book has been read, but is in excellent condition. Pages are intact and not marred by notes or highlighting. The spine remains undamaged. Seller Inventory # GOR003778959

Book Description John Blake Publishing Ltd 19/10/2009, 2009. Hardcover. Condition: Very Good. Shipped within 24 hours from our UK warehouse. Clean, undamaged book with no damage to pages and minimal wear to the cover. Spine still tight, in very good condition. Remember if you are not happy, you are covered by our 100% money back guarantee. Seller Inventory # 6545-9781844548293

Book Description John Blake Publishing Ltd, 2009. Hardcover. Condition: Used; Good. Ex Library Copy **SHIPPED FROM UK** We believe you will be completely satisfied with our quick and reliable service. All orders are dispatched as swiftly as possible! Buy with confidence!. Seller Inventory # 3742948

Book Description John Blake Publishing Ltd, 2009. Hardcover. Condition: Used; Good. **Simply Brit** Shipped with Premium postal service within 24 hours from the UK with impressive delivery time. We have dispatched from our book depository; items of good condition to over ten million satisfied customers worldwide. We are committed to providing you with reliable and efficient service at all times. Seller Inventory # mon0001655142

Book Description John Blake Publishing Ltd, 2009. Hardcover. Condition: Very Good. All orders are dispatched the following working day from our UK warehouse. Established in 2004, we have over 500,000 books in stock. No quibble refund if not completely satisfied. Seller Inventory # mon0004205365

Book Description John Blake Publishing Ltd 19/10/2009, 2009. Condition: Very Good. This book is in very good condition and will be shipped within 24 hours of ordering. The cover may have some limited signs of wear but the pages are clean, intact and the spine remains undamaged. This book has clearly been well maintained and looked after thus far. Money back guarantee if you are not satisfied. See all our books here, order more than 1 book and get discounted shipping. . Seller Inventory # 7719-9781844548293

Book Description John Blake Publishing Ltd 19/10/2009, 2009. Condition: Good. Will be shipped promptly from UK warehouse. Book is in good condition with no missing pages, no damage or soiling and tight spine. There may be some dog-eared pages showing previous use but overall a great book. Seller Inventory # 9053-9781844548293