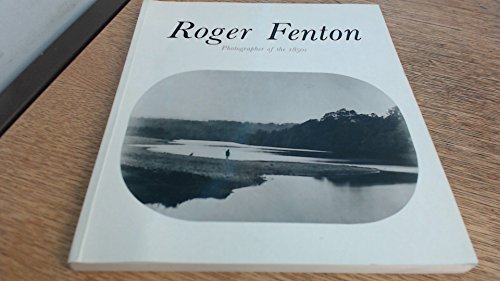 About the Author: Roger Fenton, born in Lancashire, England, was one of the pioneering forces in the nascent photographic world of the nineteenth century. Although he studied painting in Paris under Paul Delaroche, he soon became a champion of the new medium of photography. In 1847, he was one of the founding members of the Photographic Club, the first photographic society in Britain, and probably in the world. He was also responsible for the formation of the Royal Photographic Society. During his career, which lasted for ten years from 1852, he covered an unusually diverse and extensive range of subject matter, and earned a prominent place among the few universal photographers.

Richard Pare, author of the text, has been Curator of Photography for the Canadian Center for Architecture in New York since its inception in 1974.

1. Roger Fenton Photographer of the 1850s

Book Description Paperback. Condition: Fair. A readable copy of the book which may include some defects such as highlighting and notes. Cover and pages may be creased and show discolouration. Seller Inventory # GOR004342701

Book Description Paperback. Condition: Very Good. The book has been read, but is in excellent condition. Pages are intact and not marred by notes or highlighting. The spine remains undamaged. Seller Inventory # GOR002947310