Items related to According to The Rolling Stones 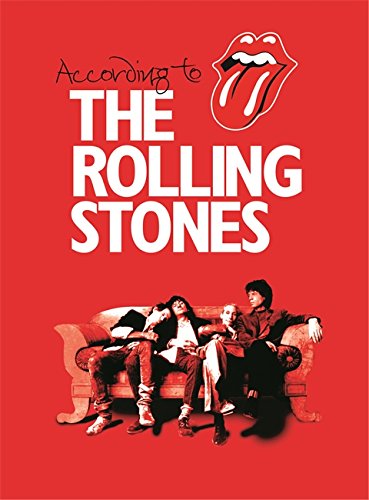 According to The Rolling Stones

Title: According to The Rolling Stones

In a large, beautifully-designed book Mick, Keith, Charlie and Ronnie describe how music affected and changed their lives and those of at least two generations, and how their own lives - and lifestyles - have in turn helped, or hindered, their music-making. The text, largely in the form of first-person narrative, is, in turn, insightful, funny, sardonic, surprising, but above all very personal and intimate. A reference section including discography, gigography and chronology is shot through with the band's eye view of their history and punctuated by pithy comments and views on album and single releases, on memorable or famed performances and other newsworthy events.

According to the Rolling Stones hews closely to the formula set in 2000 by the publication of The Beatles Anthology. Like its predecessor, it's a beautiful coffee table tome with hundreds of gorgeous photographs, from childhood pics of Mick Jagger and Keith Richards to concert shots from the 40 Licks Tour. The text is taken from recent interviews with the band's four latter-day members (Mick, Keith, Charlie Watts, and Ronnie Wood). Notably missing, however, is any contribution from former bassist Bill Wyman, who left the band in the early '90s and published his own history of the band in 2002, Rolling with the Stones. Where Wyman is an obsessive collector and diarist, the other Stones are more impressionistic in their memories, lending an approach to history as casual as the band’s concerts are rigorously planned and staged.

The first half of the Stones story has plenty of high drama (tours through the segregated South, Brian Jones's death, Altamont), which no one seems eager to reflect on deeply. (Charlie is the only one even to mention Altamont.) The more recent years has seen a long string of ever-more-successful tours and ever-less-popular albums, interrupted only by Mick and Keith’s near divorce in the '80s, plus rehab stints for Charlie and Ronnie. While The Beatles Anthology offered the surviving members' interpretations of their experiences at a distance of 30 or more years, the Stones are still living the tale they're trying to tell--and they aren’t always the most self-aware narrators. Or generous: Wyman's three-decade tenure is given short shrift, but the book finds enough space for some unnecessary digs (Wyman has "tiny hands," we're told, and an "almost effeminate" style of playing).

To flesh out the band members' own recollections, the book also contains 13 essays from music-industry friends (Ahmet Ertegun, Marshall Chess), collaborators (Don Was), famous fans (Sheryl Crow, novelist Carl Hiaasen), and, yes, even the band's financial advisor for the past 33 years, Prince Rupert Lowenstein. Their views are sometimes fascinating (the unvarnished perspective of Crawdaddy Club owner Giorgio Gomelsky, the well-told stories of art bon vivant Christopher Gibbs), but just as often self-indulgent or sycophantic. Fans looking for an artfully designed volume of photos spanning the Stones' career won't be disappointed. Anyone seeking a comprehensive history of the band may want to wait for the band's definitive biography, which has attempted many times but has yet to be written. --Keith Moerer