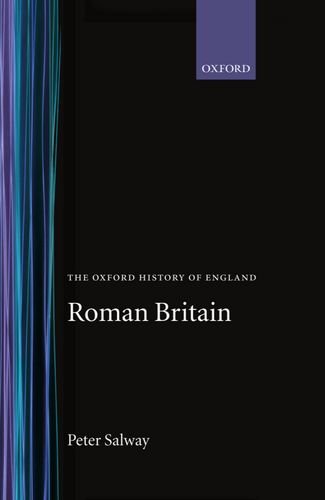 Roman Britain (The Oxford History of England, 1a)

Ships from the UK. Former Library book. Shows some signs of wear, and may have some markings on the inside. Bookseller Inventory # GRP13180692

Synopsis: Reissued in new covers, this is the first volume in the "Oxford History of England". It draws on literary sources and advances in archaeology, charting life in Roman Britain from the first Roman invasion under Julius Caesar to the final collapse of the Roman Empire in the west. It examines question such as: how much did the Britons adopt the Roman way of life during their long history as Roman provincials?; was Britain an integral part of the Roman Empire?; and what was its own distictive character?

About the Author: Peter Salway, formerly a Fellow of Sidney Sussex College, Cambridge, and subsequently of All Souls College, Oxford, is an Emeritus Professor of the Open University and Chairman of the Oxford Archaeological Unit. His publications include The Oxford Illustrated History of Roman Britain, published by
OUP in 1993 (reissued in paperback by OUP in 1997 as A History of Roman Britain). He has served as a Member of Council of the National Trust (appointed by the Society of Antiquaries), and was one of the editors of The Remains of Distant Times: Archaeology and the National Trust (Boydell, 1996). He
has also published a substantial number of articles and reviews in learned journals and publications for the general reader, mostly on Roman Britain and Classical Antiquity in general, a few on medieval and later British archaeology and architectural history.

Book Description OUP Oxford 06/08/1981, 1981. Hardcover. Condition: Very Good. Shipped within 24 hours from our UK warehouse. Clean, undamaged book with no damage to pages and minimal wear to the cover. Spine still tight, in very good condition. Remember if you are not happy, you are covered by our 100% money back guarantee. Seller Inventory # 6545-9780198217176

Book Description Clarendon Press, 1982. Condition: Fair. This is an ex-library book and may have the usual library/used-book markings inside.This book has hardback covers. In fair condition, suitable as a study copy. Dust Jacket in good condition. Please note the Image in this listing is a stock photo and may not match the covers of the actual item,1250grams, ISBN:019821717X. Seller Inventory # 8077943

Book Description -. Hardcover. Condition: Very Good. Roman Britain (Oxford History of England) This book is in very good condition and will be shipped within 24 hours of ordering. The cover may have some limited signs of wear but the pages are clean, intact and the spine remains undamaged. This book has clearly been well maintained and looked after thus far. Money back guarantee if you are not satisfied. See all our books here, order more than 1 book and get discounted shipping. Seller Inventory # 7719-9780198217176

Book Description Hardback. Condition: Fair. A readable copy of the book which may include some defects such as highlighting and notes. Cover and pages may be creased and show discolouration. Seller Inventory # GOR001173484

Book Description Hardback. Condition: Good. The book has been read but remains in clean condition. All pages are intact and the cover is intact. Some minor wear to the spine. Seller Inventory # GOR003592495

Shipping: US$ 18.79
From United Kingdom to U.S.A.
Destination, rates & speeds

There are 93 more copies of this book