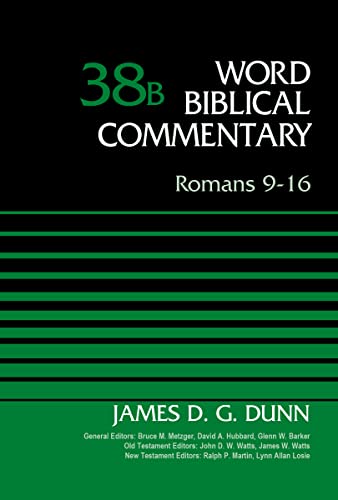 The Word Biblical Commentary delivers the best in biblical scholarship, from the leading scholars of our day who share a commitment to Scripture as divine revelation. This series emphasizes a thorough analysis of textual, linguistic, structural, and theological evidence. The result is judicious and balanced insight into the meanings of the text in the framework of biblical theology. These widely acclaimed commentaries serve as exceptional resources for the professional theologian and instructor, the seminary or university student, the working minister, and everyone concerned with building theological understanding from a solid base of biblical scholarship.

General Bibliography—occurring at the end of each volume, this extensive bibliography contains all sources used anywhere in the commentary.

James Dunn (Ph.D., Cambridge) was for many years the Lightfoot Professor of Divinity in the Department of Theology at the University of Durham. Since his retirement he has been made Emeritus Lightfoot Professor. He is a leading British New Testament scholar, broadly in the Protestant tradition. Dunn is especially associated with the New Perspective on Paul, a phrase which he is credited with coining during his 1982 Manson Memorial Lecture.

His books include Did the First Christians Worship Jesus? (2010), The New Perspective On Paul (2007), A New Perspective On Jesus: What The Quest For The Historical Jesus Missed (2005),The Theology of Paul the Apostle (1998), The Acts of the Apostles (1996), and The Epistles to the Colossians and to Philemon (1996).  In 2005, a festschrift dedicated to Dunn was published, entitled The Holy Spirit and Christian origins: essays in honor of James D. G. Dunn, comprising articles by 27 New Testament scholars, examining early Christian communities and their beliefs about the Holy Spirit.

Bruce M. Metzger (1914 – 2007) was a biblical scholar, textual critic, and a longtime professor at Princeton Theological Seminary. Metzger is widely considered one of the most influential New Testament scholars of the 20th century. He was a general editor of the Word Biblical Commentary (1997 - 2007).

David Allan Hubbard (1928 – 1996), former president and professor of Old Testament at Fuller Theological Seminary in Pasadena, California, was a recognized biblical scholar. In addition to over 30 books, he has written numerous articles for journals, periodicals, reference works. He was a general editor of the Word Biblical Commentary (1977 - 1996).