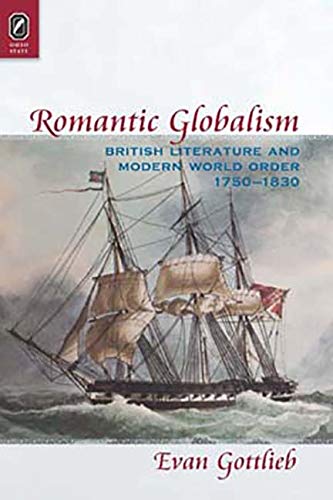 Synopsis: Romantic Globalism: British Literature and Modern World Order, 1750–1830 explores how British literature of the late eighteenth century and Romantic era both reflects and inflects the increasingly global world in which it was produced and consumed. Building on recent work in globalization studies, cosmopolitanism, and critical theory, Evan Gottlieb investigates the ways in which, following the economic and historiographical writings of the Scottish Enlightenment, a number of influential Romantic-era authors began representing, mediating, and even critiquing their experiences of globalization in poetry, fiction, and drama.

Although modern media tend to represent globalization as an essentially contemporary phenomenon, many scholars now agree that its fundamental dynamics―especially its characteristic annulment of spatial and temporal differences―have been present for several centuries. Moreover, the last decades of the eighteenth century and the first of the nineteenth century saw the convergence of a number of world-changing socio-political developments in the Western world. Romantic Globalism is significant because it is the first extended scholarly study that brings together these lines of inquiry. In so doing, Romantic Globalism not only charts a new course of study for British Romanticism but also suggests how the Romantics’ visions of globality might still be valuable to us today.

About the Author: Evan Gottlieb is associate professor of English at Oregon State University.

Book Description Ohio State University Press, 2014. Condition: Good. A+ Customer service! Satisfaction Guaranteed! Book is in Used-Good condition. Pages and cover are clean and intact. Used items may not include supplementary materials such as CDs or access codes. May show signs of minor shelf wear and contain limited notes and highlighting. Seller Inventory # 0814212549-2-4

Book Description Ohio State University Press, 2014. Hardcover. Condition: VERY GOOD. Pages are intact and are not marred by notes or highlighting, but may contain a neat previous owner name. The spine remains undamaged. Supplemental materials are not guaranteed with any used book purchases. Seller Inventory # 0814212549_abe_vg