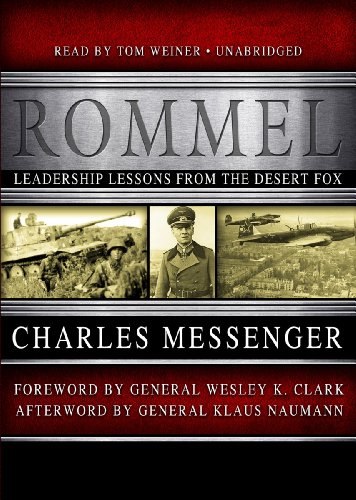 Modeled on the acclaimed 'Great Generals' Series, which features the strategy and legacy of famous American generals, 'World Generals' broadens the scope to include the world's finest military leaders. Each volume includes a foreword by General Wesley K. Clark and is coedited with an afterword by a different foreign general.

This exciting series opens with ''the Desert Fox,'' the most famous German field marshal in World War II, Erwin Rommel. A hero of the people of the Third Reich and widely respected by his opponents, Rommel proved himself highly adept at blitzkrieg warfare. Both in France and North Africa he consistently outwitted his adversaries through his ability to sense the weak spot in his enemy's deployment and by the pace at which he conducted his operations.

Rommel was seriously wounded in France just three days before the aborted attempt on Hitler's life. Rommel subsequently came under suspicion of being involved in the plot and, under pressure, committed suicide. Rommel displayed an outstanding ability to seize the initiative and retain it, and here, Charles Messenger draws on the skills behind this ability for the benefit of modern-day leaders.

About the Author: CHARLES MESSENGER served for twenty years as an officer in the Royal Tank Regiment before becoming a full-time military historian and defense analyst. He is the author of nearly forty books, including The Blitzkrieg Story. He lives in London.

GENERAL WESLEY K. CLARK served in the United States Army for thirty-four years and rose to the rank of four-star general as NATO's Supreme Allied Commander, Europe. He is author of A Time to Lead, as well as the bestselling books Waging Modern War and Winning Modern Wars. He lives in Little Rock, Arkansas.

GENERAL KLAUS NAUMANN was inspector general of the Bundeswehr from 1991 to 1996 and chairman of the NATO Military Committee from 1996 to 1999.