Items related to The Roots of Pope Francis's Social and Political... 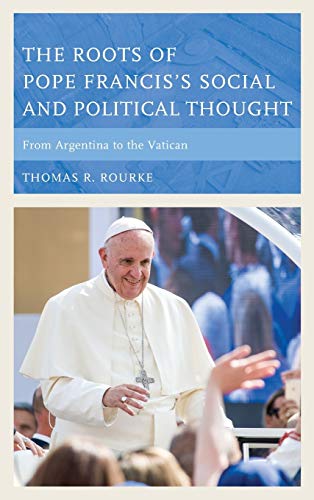 The Roots of Pope Francis's Social and Political Thought: From Argentina to the Vatican

In The Roots of Pope Francis's Social and Political Thought Thomas R. Rourke traces the development of Pope Francis's thinking from his time as a Jesuit provincial through today. Meticulously researched, the book draws on decades of Francis's writing, much of it unavailable in English, to assess Francis's approach to culture, politics, and society. Num Pages: 230 pages. BIC Classification: 1DST; 1KLSA; HRCC7; HRCX6; HRLP1; JPH. Category: (P) Professional & Vocational. Dimension: 161 x 236 x 24. Weight in Grams: 494. . 2016. Hardcover. . . . . Books ship from the US and Ireland. Bookseller Inventory # V9781442272712

Title: The Roots of Pope Francis's Social and ...

In The Roots of Pope Francis’s Social and Political Thought Thomas R. Rourke traces the development of Pope Francis’s thinking from his time as a Jesuit provincial through today. Meticulously researched, the book draws on decades of previously untranslated writings from Father Jorge Bergoglio, SJ, who went on to become archbishop and cardinal; this volume also references his recent writings as pope.

The book explores the deepest roots of Pope Francis’s thinking, beginning with the experience of the Jesuit missions in Argentina (1500s – 1700s), showing how both the success and tragedy of the missions profoundly formed his social and political views. Subsequent chapters explore influences from the Second Vatican Council through today regarding culture, politics, and economics. In Pope Francis’s understanding, there is a perpetual tension between the attempts to redeem the social order through the Gospel and the never-ending attempts to dominate peoples and their lands through a variety of imperial projects that come from the powerful. What emerges is a profoundly Christian approach to the social, political, and economic problems of our time. The Pope is portrayed as an original thinker, independent of ideological currents, rooted in the Gospels and the tradition of Catholic social thought. In a time of division and violence, the writings of Pope Francis often point to the path of peace and justice.

Thomas R. Rourke is professor of political science at Clarion University of Pennsylvania. He is author of several books, including A Conscience as Large as the World, A Theory of Personalism, and The Social and Political Thought of Benedict XVI.