Skip to main content
Home Neil Strauss Rules of the Game: The Stylelife Challenge, the Routines ... 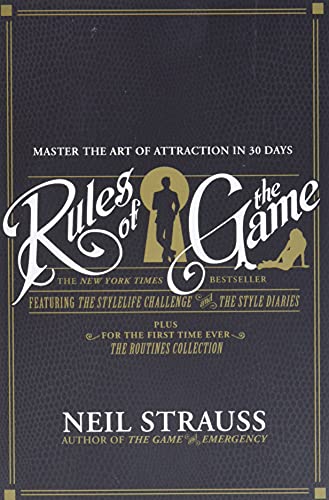 Rules of the Game: The Stylelife Challenge, the Routines Collection and the Style Diaries (Paperback)

Paperback. If you want to play the Game, you've got to know the Rules.In his international bestseller "The Game," Neil Strauss delved into the secret world of pickup artists?men .Shipping may be from multiple locations in the US or from the UK, depending on stock availability. 374 pages. 0.410. Bookseller Inventory # 9780061911699

Synopsis: Neil Strauss, New York Times bestselling author of The Game, now brings readers a portable, omnibus paperback edition of his box set Rules of the Game—a unique how-to guide for pickup artists (The StyleLife Challenge) and a volume of Game stories (The Style Diaries)—with new bonus material. The Stylelife Challenge is the manual Strauss, author of Emergency, thought he’d never write: the ultimate guide to landing the woman of your dreams, while The Style Diaries takes readers further into the seduction underworld than ever before, and delves where The Game never dared to tread: into the even more complicated rules of relationships.

I. The Stylelife Challenge
Master the Game in 30 Days

Strauss: Oddly, I never do. Instead, I wonder why it took me so long to get to point Z. And then I wonder if people are going to stick with me when I go to point whatever-is-after-Z next. I guess that would be point AA--which, come to think of it, I've already been to with Dave Navarro while writing his book.

Amazon.com: You write in the introduction to Rules of the Game that you thought The Game was your "last word on the subject," and you were ready to get on with your life. But, like Michael Corleone, you got pulled back in. Why was it so hard to leave?

Strauss: Good simile. Someone else compared it to Donnie Brasco. There's something about the seduction community that sucks people in. I've seen college kids drop out of school; doctors quit their jobs; and celebrities take huge career risks to pursue this knowledge.

It may be because, according to the Kinsey Institute, most men think about sex every two minutes. But our society has never given them tools to safely fulfill these desires. Once they find out there's a way to learn to be more successful with women--and see evidence that it works--they tend to dive in headfirst. Perhaps because, when it comes down to it, this is why we're really here.

Amazon.com: Do you meet women who have read The Game? What do they think? And with the thousands of people out there you have trained and the many more thousands who have read the book, are women starting to recognize the strategies? Do they ever say, "Hey, you're playing the Game on me"?

And actually, a guy at a book signing the other day told me he got caught using one of the openers. But he still walked away with her phone number. His advice: on the rare chance that it happens, don't get scared and scamper off. Instead, use it as an opportunity to start a conversation about the game itself and whether it works. If they've read the book, this obviously means they're interested in the subject--and now you both have something in common.

Amazon.com: Rules of the Game is actually two books: the Stylelife Challenge and the Style Diaries. The first book is pretty straightforward: a 30-day plan for "Mastering the Game." But the second one is not what you'd expect in a self-help book. Can you explain what it is and why you included it?

Strauss: I didn't want to just give people a self-help book, and promise that their life will be sunshine and unicorns forever. I wanted them to know that with knowledge and power come a new set of challenges and problems. So the black book contains seduction stories from the dark side of the game, and the fact that, as the German director Fassbinder put it, "We were born to need each other, but we still haven't learned how to live with each other."

Amazon.com: Part of the story of The Game was the tension of what happens, after you've become proficient at the Game, when you find someone you love. Is that the point: to go from player to lover (or, ulp, husband!)? How do you do that? Or does playing the Game become its own end for some people?

Strauss: If you master the game, then you also must master your own fears and insecurities. And overcoming these destructive traits can only help you have healthier relationships. That said, the downside to learning the game and then falling in love is that you have to be strong, because there are a lot more options than there once were. So for readers who are having trouble: the secret to monogamy is realizing that the fantasy of being with someone else is usually better than the reality. You can't do better than love.

1. Rules of the Game

Book Description It Books, 2009. Paperback. Condition: Good. Connecting readers with great books since 1972. Used books may not include companion materials, some shelf wear, may contain highlighting/notes, may not include cdrom or access codes. Customer service is our top priority!. Seller Inventory # S_290372848

2. Rules of the Game

Book Description It Books, 2009. Paperback. Condition: Good. Connecting readers with great books since 1972. Used books may not include companion materials, some shelf wear, may contain highlighting/notes, may not include cdrom or access codes. Customer service is our top priority!. Seller Inventory # S_289380232

3. Rules of the Game

4. Rules of the Game

Book Description It Books. Paperback. Condition: GOOD. Spine creases, wear to binding and pages from reading. May contain limited notes, underlining or highlighting that does affect the text. Possible ex library copy, will have the markings and stickers associated from the library. Accessories such as CD, codes, toys, may not be included. Seller Inventory # 3326049073

5. Rules of the Game

Book Description It Books, 2009. Paperback. Condition: Good. Connecting readers with great books since 1972. Used books may not include companion materials, some shelf wear, may contain highlighting/notes, may not include cdrom or access codes. Customer service is our top priority!. Seller Inventory # S_270656671

6. Rules of the Game

Book Description It Books, 2009. Paperback. Condition: Good. Connecting readers with great books since 1972. Used books may not include companion materials, some shelf wear, may contain highlighting/notes, may not include cdrom or access codes. Customer service is our top priority!. Seller Inventory # S_266080927

7. Rules of the Game

Book Description It Books, 2009. Paperback. Condition: Good. Connecting readers with great books since 1972. Used books may not include companion materials, some shelf wear, may contain highlighting/notes, may not include cdrom or access codes. Customer service is our top priority!. Seller Inventory # S_279178174

8. Rules of the Game

Book Description It Books, 2009. Condition: Good. A+ Customer service! Satisfaction Guaranteed! Book is in Used-Good condition. Pages and cover are clean and intact. Used items may not include supplementary materials such as CDs or access codes. May show signs of minor shelf wear and contain limited notes and highlighting. Seller Inventory # 0061911690-2-4

9. Rules of the Game

Book Description It Books. Condition: Very Good. . A copy that may have a few cosmetic defects. May also contain a few markings such as an owner's name, short gifter's inscription or light stamp. Seller Inventory # G08A-01291

Book Description Paperback. Condition: Very Good. The book has been read, but is in excellent condition. Pages are intact and not marred by notes or highlighting. The spine remains undamaged. Seller Inventory # CIN000244421

There are 21 more copies of this book