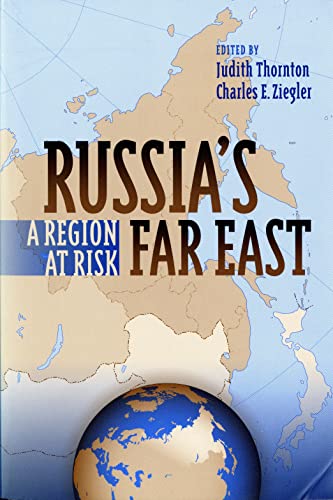 Synopsis: The security environment of Northeast Asia is increasingly affected by developments in the Russian Far East, including a longstanding economic crisis, changes in Russia's military policies, and the devolution of power to regional governments. Continuing poverty in the Russian Far East, the pervasiveness of organized crime, and weak state authority have provided a fertile breeding ground for illicit activities that may prove harmful to Russia's Pacific neighbors. Hopes that resource development and integration into the Asia-Pacific economy would fuel regional recovery have been frustrated by poor infrastructure, a difficult business environment, and Russian concerns about becoming a "resource appendage" to the developed world.

Russia's Far East: A Region at Risk comprehensively assesses the relationships among the economic collapse of the region; the post-Cold War role of Asia in Russia’s security policy; trends in Russia’s center-regional relations that impact tax collection, resource extraction, the military, and other issues; Russia's ability to manage potential areas of conflict like the maintenance of the nuclear fleet, nuclear dumping of radioactive materials in the Sea of Japan, and illegal migration from China; and the shifting balance of power in Asia.

An interdisciplinary team of specialists from the United States, Russia, China, Japan, and Korea discuss the historical, political, and economic contexts, as well as the strategic implications, of these developments. The contributors address the vital questions of how to achieve a stable political order in the Russian Far East, how to develop economic growth in the region, and how to promote efforts to link Russia and the Asia-Pacific powers into a cooperative framework of diplomatic relations.

Book Description University of Washington Press, 2002. Condition: Good. Shows some signs of wear, and may have some markings on the inside. Seller Inventory # GRP93419104

Book Description University of Washington Press. Paperback. Condition: Good. A copy that has been read, but remains in clean condition. All pages are intact, and the cover is intact. The spine may show signs of wear. Pages can include limited notes and highlighting, and the copy can include previous owner inscriptions. At ThriftBooks, our motto is: Read More, Spend Less. Seller Inventory # G0295982101I3N00

Book Description University of Washington Press. Condition: Acceptable. Paperback The item is fairly worn but still readable. Signs of wear include aesthetic issues such as scratches, worn covers, damaged binding. The item may have identifying markings on it or show other signs of previous use. May have page creases, creased spine, bent cover or markings inside. Packed with care, shipped promptly. Seller Inventory # W-006-0752

Book Description University of Washington Press, 2002. Condition: Good. A+ Customer service! Satisfaction Guaranteed! Book is in Used-Good condition. Pages and cover are clean and intact. Used items may not include supplementary materials such as CDs or access codes. May show signs of minor shelf wear and contain limited notes and highlighting. Seller Inventory # 0295982101-2-4