Items related to SEARCHING FOR JOHN FORD: A Life 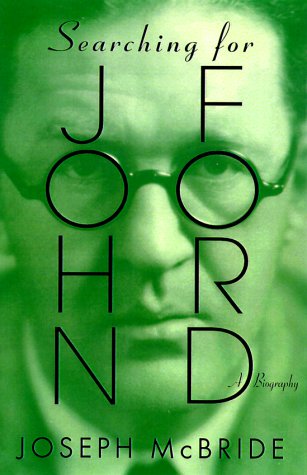 SEARCHING FOR JOHN FORD: A Life

As new, unread, first edition, first printing, in fine, mylar-protected dust jacket Illustrated with two sections of black-and-white photographs. 838 pp, with Index. *Packed carefully and shipped in a box to insure arrival in the best condition.Very scarce title, especially in this condition.{Not remainder-marked or price-clipped} A99. Bookseller Inventory # 022899

Hollywood has given us no greater director than John Ford. Between 1917 and 1970, Ford directed and/or produced some 226 pictures, from short silent films to ambitious historical epics and searingly vivid combat documentaries. His major works-- such as Stagecoach, The Grapes of Wrath, How Green Was My Valley, They Were Expendable, The Quiet Man, The Searchers, and The Man Who Shot Liberty Valance-- are cinematic classics. Ford's films about American history are profound explorations of the national character and the crucibles in which that character was forged. Throughout his long and prolific career, Ford became best known for redefining the Western genre, setting his dramas about pioneer life against the timeless backdrop of Monument Valley.

Ford's films earned him worldwide admiration. As a man, however he was tormented and deliberately enigmatic. He concealed his true personality from the public, presenting himself as an illiterate hack rather than as the sensitive artist his films show him to be. He shrewdly guided the careers of some of Hollywood's greatest stars, including John Wayne, Henry Fonda, James Stewart, Maureen O'Hara, and Katharine Hepburn, but he could be abusive, even sadistic, in his treatment of actors. He began his life steeped in the lore of Irish independence and progressive politics; by the end a hawkish Republican and rear admiral in the U.S. Navy, he was lionized by Richard Nixon for creating films that extol the "old virtues" of heroism, duty, and patriotism. Little wonder that those who have written about Ford have either strained to reconcile the daunting paradoxes of his work and personality or avoided them entirely. They have printed the legend and ignored the facts-- or printed the facts and obscured the legend.

In its depth, originality, and insight, Searching for John Ford surpasses all previous biographies of the filmmaker. Encompassing and illuminating Ford's complexities and contradictions, Joseph McBride comes as close as anyone ever will to solving what Andrew Sarris called the "John Ford movie mystery." McBride traces the whole trajectory of Ford's life, from his beginning as "Bull" Feeney, the near-sighted, football-playing son of Irish immigrants in Portland, Maine, through to his establishment as America's most formidable and protean filmmaker. The author of critically acclaimed biographies of Frank Capra and Steven Spielberg, McBride interviewed Ford in 1970 and co-wrote the seminal study John Ford with Michael Wilmington. For more than thirty years, McBride has been exploring the interconnections between Ford's inner life and his work. He interviewed more than 120 of the director's friends, relatives, collaborators, and colleagues. Blending lively and penetrating analyses of Ford's films with an impeccably documented narrative of the historical and psychological contexts in which those films were created, McBride has at long last given John Ford the biography his stature demands. Searching for John Ford will stand as the definitive portrait of an American genius.

Joseph McBride is a film historian and critic whose fourteen books include Orson Welles, Hawks on Hawks, Steven Spielberg: A Biography, and Frank Capra: The Catastrophe of Success. A former reporter and reviewer for Daily Variety in Hollywood, he is an adjunct professor of film and literature in the Irish studies program at New College of California in San Francisco.