Items related to TO SIBERIA 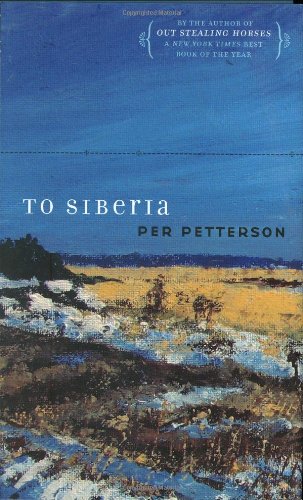 In the bitter cold of Danish Jutland, where the sea freezes over and the Nazis have yet to invade, a young girl dreams of one day going on a great journey to Siberia, while her beloved brother Jesper yearns for the warmer climes of Morocco. Their home, with a pious mother who sings hymns all day and a silent father, is as cold as their surroundings. But the unshakeable bond between brother and sister creates a vital warmth which glows in spite of the chill and the dark clouds that threaten to overtake their dreams. Translated from the Norwegian by Anne Born. Author of OUT STEALING HORSES (winner of the IMPAC Dublin Literary Award, the Independent Foreign Fiction Prize, and the Norwegian Booksellers' Prize), IT'S FINE BY ME, IN THE WAKE, and i CURSE THE RIVER OF TIME.New, mint, unread, first edition, first printing, in new, mylar-proteced dust jacket. {Not remainder-marked or price-clipped} BUND. Bookseller Inventory # 023290

I was fourteen and a half when the Germans came. On that 9th April we woke to the roar of aeroplanes swooping so low over the roofs of the town that we could see the black iron crosses painted on the underside of their wings when we leaned out of the windows and looked up.


In this exquisite novel, readers will find the crystalline prose and depth of feeling they adored in Out Stealing Horses, a literary sensation of 2007.

A brother and sister are forced ever more closely together after the suicide of their grandfather. Their parents' neglect leaves them wandering the streets of their small Danish village. The sister dreams of escaping to Siberia, but it seems increasingly distant as she helplessly watches her brother become more and more involved in resisting the Nazis.

Per Petterson is the author of books including In the Wake, I Curse the River of Time, and Out Stealing Horses, which won the IMPAC Dublin Literary Award, the Independent Foreign Fiction Prize and the Norwegian Booksellers' Prize. The New York Times Book Review named it one of the 10 best books of the year. A former bookseller, Petterson lives in Oslo, Norway.