Items related to SILENCE OF THE GRAVE 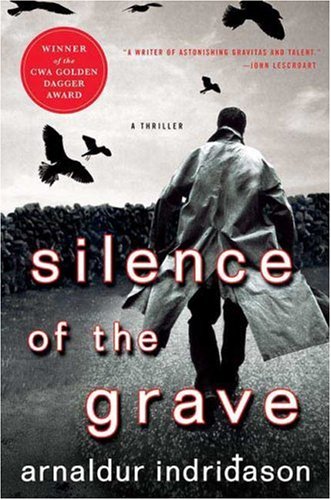 SILENCE OF THE GRAVE

Winner of the CWA Golden Dagger Award, SILENCE OF THE GRAVE is the second Indridason novel, following JAR CITY, to be translated into English. Translated from the Icelandic by Bernard As new, in fine, mylar-protected dust jacket. M55. Bookseller Inventory # 020311

Title: SILENCE OF THE GRAVE

Last year Jar City introduced international crime-writing sensation Arnaldur Indridason to rave reviews and a rousing welcome from American thriller fans. And now, Silence of the Grave, the next in this stunning series has won the coveted Golden Dagger Award. Presented by the British Crime Writers' Association, previous winners of this award include John Le Carre, Minette Walters, Henning Mankell, and James Lee Burke.
In Silence of the Grave, a corpse is found on a hill outside the city of Reykjavík, and Detective Inspector Erlendur Sveinsson and his team think the body may have been buried for some years.
While Erlendur struggles to hold together the crumbling fragments of his own family, slowly but surely he finds out the truth about another unhappy family. Few people are still alive who can tell the tale, but even secrets taken to the grave cannot remain hidden forever.
Destined to be a classic in the world of crime fiction, Silence of the Grave is one of the most accomplished thrillers in recent years.

"Classic mystery fiction, both compassionate and thrilling. Indridason is about to become one of the brightest stars in the genre's dark skies."
- John Connolly, author of Dark Hollow

"Riveting. Look for Indridason to appear on critics' shortlists for best new author, best mystery novel, and so forth."
- BookPage

"Fans of mystery in general and Henning Mankell and Karin Fossum can only exult."
- Library Journal (starred review)
"No wonder Arnaldur Indridason won so many awards. He's a great storyteller, and American readers will overwhelmingly agree."
- C. J. Box, Anthony Award-winning author of Out of Range

"Reminiscent of Simenon."
- Reginald Hill, author of Dialogues of the Dead

"Gripping. . . . There is a Ross Macdonald element to all this . . . recalls Madeleine Nabb and Donna Leon."
- Booklist