Items related to SPEAKING IN TONGUES 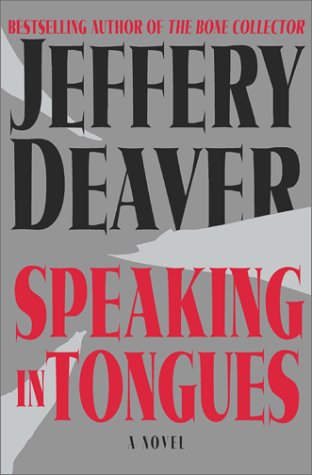 The disappearance of his teenage daughter pits prosecutor Tate Collier against Aaron Matthews, a Harvard-educated psychiatrist consumed with revenge. By the author of The Bone Collector. 175,000 first printing.

Tate Collier, the flawed hero of best-selling author Jeffery Deaver's exciting new thriller, is a divorced prosecutor whose tangled feelings about his ex-wife and their teenage daughter come to the forefront when the girl is kidnapped by a murderous psychiatrist bent on settling a personal score with Collier. It soon becomes clear that Tate really doesn't have a clue about Megan's life or her emotional reality, but the reader gets a fuller explanation from the girl's own perspective, and it's Megan, rather than her father, who turns out to be the real hero of this story.

Deaver draws the reader into the angry, rebellious Megan's desperate fight to save her own life in the creepy surroundings of a decrepit insane asylum in the Virginia mountains. (Deaver practically writes blueprints for the inevitable Hollywood set designer who will have a field day bringing the shuttered, rat-infested scene of Megan's captivity to the screen.) The motivation for Dr. Aaron Matthews's vendetta against the Colliers isn't revealed until most of the way through this crisply paced novel, but he's convincingly insane enough for it not to matter. Deaver throws a few implausible scenarios the reader's way, but they won't matter either; the chase is the thing. The narrative steams along without letting up, and the result is a nail biter that will keep the pages turning. --Jane Adams