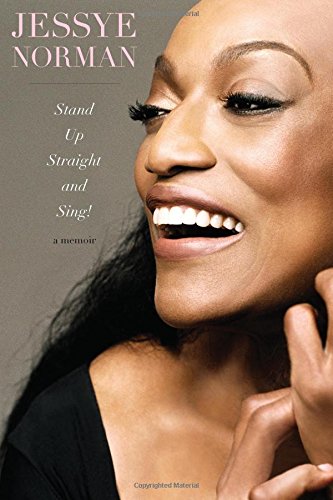 STAND UP STRAIGHT AND SING!

Signed and dated 15 May 2014 by author on title page in black fountain ink. Jessye Norman is one of America's greatest and most accomplished singers, winner of five Grammy awards and dozens of international prizes, the National Medal of the Arts, and a Kennedy Center Honor among her countless accolades. STAND UP STRAIGHT AND SING!, her just-released memoir, is the astonishing story of one woman's life from her childhood in in the South to the world's greatest stages. Mint, new, unread first edition, first printing copy, opened only for signing, in new, mylar-protected dust jacket. This is a very scarce signed title.{Not remainder-marked or price-clipped} *Packed carefully and shipped in a box to insure arrival in pristine condition. BUND. Bookseller Inventory # 021867

Synopsis: One of America's most admired and decorated artists tells her amazing story, from her childhood in the South to the world's greatest stages.

Jessye Norman is not only one of the world's most admired and beloved singers, she is an American icon whose life story is as moving and dramatic as the great operatic roles she has performed on stage.

Born and raised in Augusta, Georgia, nurtured in a close family and tight-knit community centered around the church, she studied the piano and sang the songs of her childhood, not dreaming that this passion for music might lead to her life's profession.

In Stand Up Straight and Sing!, Jessye Norman recalls in rich detail the strong women who were her role models, from her ancestors to family friends, relatives, and teachers. She hails the importance of her parents in her early learning and experiences in the arts. And she describes coming face-to-face with racism, not just as a child living in the segregated South, but also as an adult out and about in the world.
She speaks of the many who have inspired her and taught her essential life lessons. A special interlude on her key relationship with the pioneering African American singer Marian Anderson reveals the lifelong support that this great predecessor provided through her example of dignity and grace at all times.

The story of one woman’s astonishing life, Stand Up Straight And Sing! is not just for lovers of music, but for everyone.

1. Stand Up Straight and Sing!