Items related to SURVIVAL OF THE FITTEST 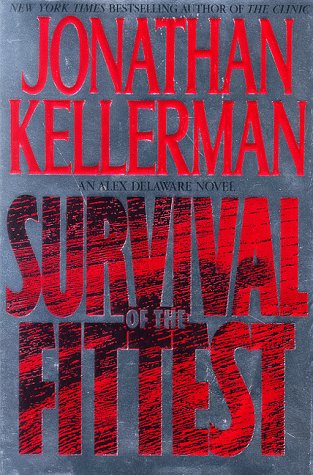 SURVIVAL OF THE FITTEST

Signed by author on title page. LAPD detective Milo Sturgis and his longtime friend psychologist Alex Delaware, investigating the cold-blooded murder of the slightly retarded fifteen-year-old daughter of a diplomat, find a father who denies a political motive and seems more intent on controlling the investigation than solving the crime. In the end, however, it is Alex alone who will go undercover to expose the smug brutality of a murderous conspiracy and a terrifying contempt for human life. Fine, in fine, mylar-protected dust jacket. MBS/BB. Bookseller Inventory # 1957

Title: SURVIVAL OF THE FITTEST

In this riveting follow-up to the New York Times bestseller The Clinic, Jonathan Kellerman proves once again why he is "crime fiction's hottest author."  And psychologist Dr. Alex Delaware confronts an almost unimaginably cruel, arrogant, and obsessed killer who takes as much pleasure in matching wits with the police as in robbing human life.

The slightly retarded fifteen-year-old daughter of a diplomat dies on a school field trip--forced or lured into a deserted corner of the Santa Monica mountains and killed in cold blood.  Her father adamantly denies the possibility of a political motive, which leaves LAPD detective Milo Sturgis and his longtime friend psychologist Alex Delaware to pose the question: Why?

There are no signs of struggle, no evidence of sexual assault--and there are no easy answers.  Just one innocent youngster...dead.

The victim's father is so intent on controlling the investigation that Alex and Milo start to wonder if he wants to bring out the truth--or make sure it stays buried.  Then there is another killing, and within days Alex finds himself ensnared in one of the darkest, most menacing cases of his career.

Driven to find answers, he and Milo will work closely with Inspector Daniel Sharavi, the brilliant Israeli police detective introduced in Jonathan Kellerman's The Butcher's Theater.  In the end, though, it is Alex who will go undercover, alone, to expose the smug brutality of a murderous conspiracy and a terrifying contempt for human life.  Weaving together the threads of a mystery that lead from a child's murder to a young scientist's suicide, Jonathan Kellerman draws one of the most chilling, frighteningly realistic portraits of evil you will ever experience.

Legendary L.A. psychologist-turned-novelist Kellerman raids real life when inventing the adventures of his psychologist sleuth, Dr. Alex Delaware, and some of the scariest parts of Survival of the Fittest are historical. Eugenicists lurk behind a murder spree Alex must solve, and he notes that the eugenics movement involved one elite U.S. college professor who advocated castration of ethnically lesser men, a forced sterilization ordered by Supreme Court Justice Holmes that Hitler used as a precedent to sterilize millions, and the pre-Holocaust coinage of the phrase "final solution."

Besides a truly horrifying theme, Survival of the Fittest boasts sharp but not arch dialogue; savvy psychological insights into stressed-out cops, suicides' loved ones, and malevolent therapists; and a sense of place so vivid that the Los Angeles Times has rated Kellerman the most evocative L.A. author since Raymond Chandler.

The plot's as twisty as a canyon road, and it's great fun to ride along with Dr. Alex and his sidekick, the burly, gay LAPD detective Milo Sturgis, as they dodge large red herrings and strive to find out why mildly handicapped kids are suffering "gentle strangulation" by killers who sign their handiwork with the mysterious letters DVLL, and what the devil this has to do with the high-IQ group Meta. Bonus for Kellerman fans: his Israeli serial killer catcher, Daniel Sharavi, star of his 1988 bestseller The Butcher's Theater, joins the sleuth team. But in the gory finale, Dr. Alex faces absolute evil all alone. --Tim Appelo