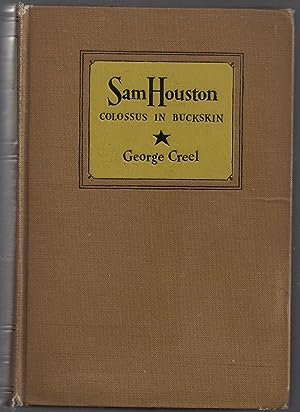 We're sorry; this specific copy is no longer available. Here are our closest matches for Sam Houston: Colossus in Buckskin by Creel, George.

341 pp. Lacks the dust jacket. Wear to the edges of boards and top and bottom of the spine, rear hinge appears to be starting with rear pastedown splitting along the edge, a bit of separation between backstrip and top of textblock, name written on verso of frontispiece. Bookseller Inventory # 00004533

Book Description Cosmopolitan Book Company, New York, 1928. hardcover. Condition: Good. 1st. Former Library book. Shows some signs of wear, and may have some markings on the inside. Seller Inventory # GRP95612964

Book Description New York, New York: Cosmopolitan Book Corporation, 1928. Hardcover. Condition: Good. No Jacket. 1928 hardcover without a dust jacket from Cosmopolitan Book Corp. . The boards have typical light wear to the edges. The previous owner's name is penned on the initial page with the number '98' in red marker on the front paste down. With those exceptions, the contents appear clean. The frontispiece page is starting to detach from the binding with the remaining contents securely bound. No remainder marks and not an ex-library, we ship daily. Seller Inventory # t10819

Shipping: US$ 19.39
From United Kingdom to U.S.A.
Destination, rates & speeds

Book Description Read Books, United Kingdom, 2007. Paperback. Condition: New. Language: English . Brand New Book ***** Print on Demand *****.COLOSSUS IN BUCKSKIN George Creel MCMXXVIU COSMOPOLITAN BOOK CORPORATION NEW YORK Contents PAGE THE BOYHOOD OF A TITAN I SAM HOUSTON WINS HIS SPURS 14 THE GREAT GESTURE 26 CO-LON-NEH THE ROVER 39 CANING A CONGRESSMAN 49 THE STORY OF TEXAS 63 A NEW LIFE IN A NEW LAND 76 THE TEXANS REBEL 9 A DISASTROUS VICTORY IQ4 THE ALAMO 119 THE LONE STAR REPUBLIC 132 THE GOLIAD MASSACRE 145 HOUSTONS VALLEY FORGE 157 SAN JACINTO 172 THE NAPOLEON OF THE WESTERN WORLD 185 TEXAS AND THE UNITED STATES 198 HOUSTON AS AN ADMINISTRATOR 213 HOUSTON AND HIS ENEMIES 226 LAMAR BRINGS RUIN 239 SANTA ANNAS GRATITUDE 251 HOUSTON PLAYS WORLD POLITICS 265 ENGLAND AND FRANCE CONSPIRE 280 ANNEXATION 29 SAM HOUSTON AS SENATOR 302 SAM HOUSTON VS. TEXAS 318 LAST DAYS OF A TITAN 33 Illustrations SAM HOUSTON Frontispiece ANDREW JACKSON Facing page 30 JAMES BOWIE 82 THE ALAMO 1 2O DAVID CROCKETT 128 THE SURRENDER OF SANTA ANNA 1 86 STEPHEN F. AUSTIN SANTA ANNA Sam Houston THE BOYHOOD OF A TITAN JQETWEEN Hernando de Soto, first to blaze a JD trail through the wildernesses of the New World, and Kit Carson, last of the great frontiersmen, streams an endless procession of tremendous figures Homeric in courage and achievement, flaming hugely against the dull background of uniformity yet not in the whole colorful story of America is there record of a more amazing career than that of Sam Houston, the Colossus in buckskin who won an empire for his country From the cradle to the grave he walked with drama. As a boy he ran away from home to live in the wig wams of the Cherokees serving under Andrew Jackson in the war against the Creeks, he led the charge that carried the Indian breastworks, receiving wounds that stretched him on the ground for dead elected congressman and then governor by the adoring Tennesseeans, even the presidency was not beyond his hopes, yet that happened which sent him into exile Sam Houston between two suns seeking refuge with the Cherokees for a second time, drink and melancholy sank him to a dark level beneath the regard of men entering Texas, resolved to build a new life in a new land, he lifted himself high above his degradation and when the colonists rose in rebellion against the brutal tyrannies of a Mexican dictator, it was a clear-eyed, indomitable Houston who marshaled ragged volun teers, conducted masterful retreats and finally crushed Santa Anna and his army in a day of slaughter. His later years were no less packed with color and high accomplishment. As president of the Lone Star Republic, he beat down the greeds, impatiences and vagaries of men, building firm and enduring founda tions under the tottering superstructure of govern ment it was his shrewd statecraft, pitting European powers against America, that made annexation pos sible in the Senate of the United States, although a Southerner and a slaveholder, he braved the hate and anger of the South by an unflinching stand against slavery and secession contemptuous of threats against his life, he returned to Texas to run for governor on a Unionist platform and won against overwhelming odds confronted with the necessity of declaring allegiance to the Confederate States, he suffered depo sition rather than surrender his principles, and walked out of office to the humble cabin that was his home, old, poor and proscribed, but with his head unbowed, A gigantic, towering fig-are, well worthy to rank Sam Houston with the illustrious and admired of America, yet, save in the Southwest, born of his courage, Sam Houston is but a name, known in detail only to the inquir ag few. Out of the annexation of Texas, an expansion important enough in itself, came the Mexican War that added California, New Mexico, Arizona, Nevada and Utah to the Union, yet schoolbooks either ignore Houstons connection with these epochal events, or else confine themselves to casual and misleading mention. The history of the republic is stained throughout with similar instances of neglect and ingratitude. Seller Inventory # AAV9781406768411

View all search results for this book
More Books
#renderBDPScripts()