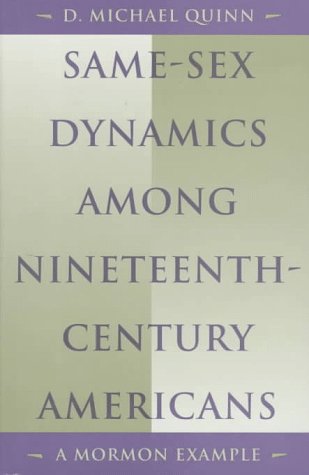 Synopsis: Winner of the Herbert Feis Award from the American Historical Association and named one of the best religion books of the year by Publishers Weekly, D. Michael Quinn's "Same-Sex Dynamics among Nineteenth-Century Americans" has elicited critical acclaim as well as controversy. Using Mormonism as a case study of the extent of early America's acceptance of same-sex intimacy, Quinn examines several examples of long-term relationships among Mormon same-sex couples and the environment in which they flourished before the onset of homophobia in the late 1950s.

Review: "Quinn's elegant book is a model of critical religious history." -- Publishers Weekly "A book that is nothing short of astonishing. Who could have possibly imagined the tolerance with which same-sex relationships were accepted by the Mormon Church, as recently as the 1940s? ... [Quinn's] extraordinary accomplishment is especially notable for the subtlety of his claims and the nuanced interpretation he gives them, all supported by exhaustive documentation." -- Library Journal "Quinn's brilliantly written, path-breaking study of same sex behavior and Mormon Church attitudes is essential reading for all historians of the American West, students of American religion, and serious analysts of homosexuality." -- Martin Ridge, Huntington Library "Thoroughly researched, comparative in approach, and subtly argued... Same-Sex Dynamics is a valuable contribution to gay, lesbian, and gender studies, particularly given its methodological sophistication and its focus on a region and a culture far removed from major urban centers." - Richard D. Oueletter, Religious Studies Review "D. Michael Quinn tackles a complex and controversial subject in Same-Sex Dynamics among Nineteenth-Century Americans. The happy result is sterling scholarship, balanced interpretation, and insightful analysis. In short, Quinn offers one of the most important studies to date on the topic of American sexuality." -- Anne M. Butler, Journal of American History

Book Description University of Illinois Press, 1996. Condition: Good. A+ Customer service! Satisfaction Guaranteed! Book is in Used-Good condition. Pages and cover are clean and intact. Used items may not include supplementary materials such as CDs or access codes. May show signs of minor shelf wear and contain limited notes and highlighting. Seller Inventory # 025202205X-2-4

Book Description University of Illinois Press, 1996. Hardcover. Condition: GOOD. Has little wear to the cover and pages. Contains some markings such as highlighting and writing. Seller Inventory # 025202205X_abe_gd

Book Description University of Illinois Press, 1996. Hardcover. Condition: VERY GOOD. Pages are intact and are not marred by notes or highlighting, but may contain a neat previous owner name. The spine remains undamaged. Seller Inventory # 025202205X_abe_vg