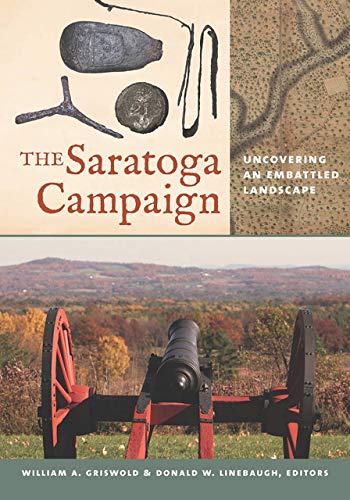 Synopsis: The battles of Saratoga proved to be a turning point in the Revolutionary War when British forces under the command of General John Burgoyne surrendered to American forces led by General Horatio Gates. The Saratoga Campaign provides a new and greatly expanded understanding of the battles of Saratoga by drawing on the work of scholars in a broad range of academic disciplines. Presenting years of research by material culture scholars, archaeologists, historians, museum curators, military experts, and geophysicists, this definitive volume explores these important Revolutionary War battles and their aftermath, adding a physical and tangible dimension to the story of the Saratoga campaign. Presenting the latest hands-on research, The Saratoga Campaign is an original and multifaceted contribution to our understanding of this critical event in America’s birth.

About the Author: WILLIAM A. GRISWOLD is an archaeologist with the National Park Service’s Northeast Region Archaeology Program. DONALD W. LINEBAUGH, professor at the University of Maryland, has written a number of books, including The Man Who Found Thoreau: Roland W. Robbins and the Rise of Historical Archaeology in America.

8. The Saratoga Campaign and#8211; Uncovering an Embattled Landscape