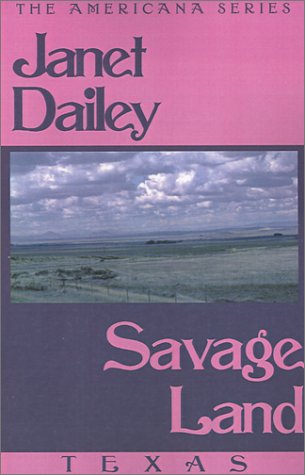 Synopsis: How upsetting for Jason that Coley wasn't falling into his arms as he had assumed she would! This is the novel of Texas in Janet Dailey's Americana series.

About the Author: NEW YORK TIMES Best-Selling Author Janet Dailey was born Janet Haradon in 1944 in Storm Lake, Iowa. She attended secretarial school in Omaha, Nebraska before meeting her husband, Bill. Bill and Janet worked together in construction and land development until they retired to travel throughout the United States, inspiring Janet to write the Americana series of romances, setting a novel in every state of the Union. In 1974, Janet Dailey was the first American author to write for Harlequin. Her first novel was No Quarter Asked. She has since gone on to write approximately 90 novels, 21 of which have appeared on the New York Times bestseller list. She has won many awards and accolades for her work, appearing widely on radio and television. Today, there are over three-hundred million Janet Dailey books in print in 19 different languages, making her one of the most popular novelists in the world. For more information about Janet Dailey visit

Book Description e-reads.com, 1999. Paperback. Condition: Good. Connecting readers with great books since 1972. Used books may not include companion materials, some shelf wear, may contain highlighting/notes, may not include cdrom or access codes. Customer service is our top priority!. Seller Inventory # S_252725743

Book Description e-reads.com, 1999. Condition: Good. A+ Customer service! Satisfaction Guaranteed! Book is in Used-Good condition. Pages and cover are clean and intact. Used items may not include supplementary materials such as CDs or access codes. May show signs of minor shelf wear and contain limited notes and highlighting. Seller Inventory # 0759238235-2-4