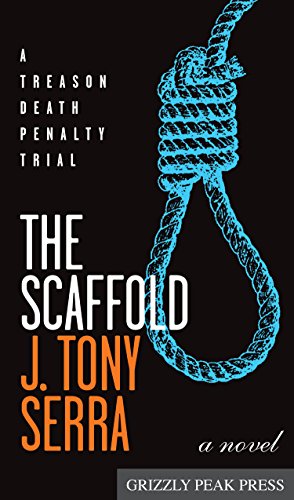 Synopsis: Beginning with an outline as a young lawyer around 1960 and finally completed in prison as a tax resister 50 or so years later, J. Tony Serra has completed his first novel, THE SCAFFOLD: A Treason Death Penalty Trial. Taking place historically during the Second World War in the South Pacific with U.S. P.T. Boats, Japanese zero attack planes, and on an island paradise, this court martial trial is filled with Serra's legal career experiences but is an example of life as absurdity, all aspects of life are metaphors of absurdity, thinking intellectually in the Theater of the Absurd. The message, if there is a message, is that war is absurd; treason is absurd; the death penalty is absurd and that platonic love is humanity's only redemption.

About the Author: A native son of San Francisco, J. Tony Serra has dedicated his life to defending society's outcasts. After earning a Philosophy degree form Stanford University, Serra went on to graduate from UC Berkeley's Boalt Hall School of Law in the 1960s, an era he calls the golden age of law. In his more than 45 years of practice, Serra has helmed a number of noteworthy cases, including Huey Newton, Bear Lincoln, Chol Soo Lee, the Hell's Angels, Hooty Croy, the Symbionese Liberation Army, the White Panthers, Bari & Cherney v. FBI and more. Serra has been honored with awards from, among others, NORML, ACLU, American Lawyer Magazine, San Francisco Board of Supervisors and Trial Lawyers for Public Justice. Although he has been admitted to practice in 45 separate federal and state jurisdictions in 28 different states, Serra still calls San Francisco home. His first two books are Walking The Circle and TONY SERRA, published by Grizzly Peak Press.

Book Description Grizzly Peak Press, 2016. Paperback. Condition: Good. Connecting readers with great books since 1972. Used books may not include companion materials, some shelf wear, may contain highlighting/notes, may not include cdrom or access codes. Customer service is our top priority!. Seller Inventory # S_281082217

Book Description Grizzly Peak Press. Paperback. Condition: As New. An apparently unread copy in perfect condition. Dust cover is intact; pages are clean and are not marred by notes or folds of any kind. At ThriftBooks, our motto is: Read More, Spend Less. Seller Inventory # G0983926484I2N00

Book Description Grizzly Peak Press, 2016. Condition: Good. A+ Customer service! Satisfaction Guaranteed! Book is in Used-Good condition. Pages and cover are clean and intact. Used items may not include supplementary materials such as CDs or access codes. May show signs of minor shelf wear and contain limited notes and highlighting. Seller Inventory # 0983926484-2-4