Items related to The Science Fiction Universe and Beyond: Syfy Channel... 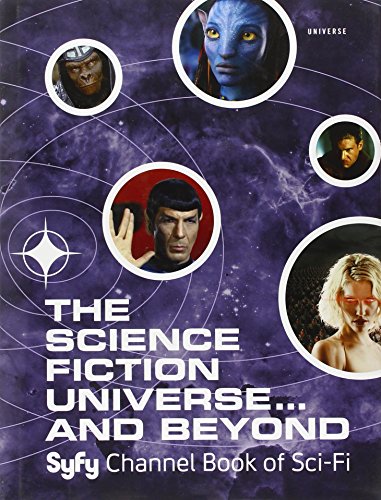 The Science Fiction Universe and Beyond: Syfy Channel Book of Sci-Fi

Title: The Science Fiction Universe and Beyond: ...

Travel where no man has gone before with this decade-by-decade progression of science-fiction classics. From the classic, low-budget space exploration Flash Gordon tales of the Saturday matinee serials, to the slick CGI-realized world of The Matrix, science-fiction films have long been pushing the boundaries of the visually and dramatically fantastic—turning the known world on its head, playing with the laws of physics, and all the while holding their audience spellbound. The Science Fiction Universe . . . and Beyond offers a breadth of knowledge, insight, and passion to a century of close encounters, black holes, time travel, distant planets, impossible quests, nuclear war, futuristic technology, inexplicable forces, spaceships, extraordinary monsters, and subterranean societies.Arranged chronologically, showing the progression of sci-fi over the decades, and delving into interesting back stories and trivia, this volume includes a variety of classic films and television shows, such as The Day the Earth Stood Still (1951), Invasion of the Body Snatchers (1956), The Twilight Zone (1959–1964), Doctor Who (1963–1989), 2001: A Space Odyssey (1968), A Clockwork Orange (1971), Star Wars, Episode IV—A New Hope (1977), Alien (1979), E.T.: The Extra-Terrestrial (1982), Star Trek: The Next Generation (1987–1994), Terminator 2: Judgment Day (1991), Stargate SG-1 (1997–2007), Battlestar Galactica (2004–2009), and many others.