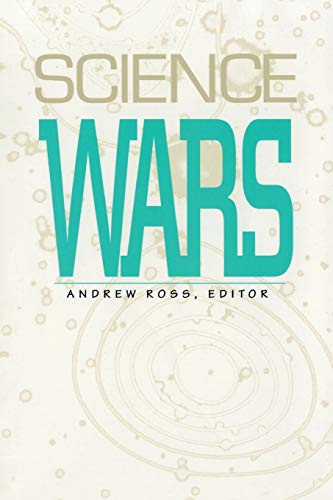 Synopsis: In the wake of the highly fractious Culture Wars, conservatives in science have launched a backlash against feminist, multiculturalist, and social critics in science studies. Paul Gross and Norman Levitt’s book Higher Superstition, presented as a wake-up call to scientists unaware of the dangers posed by the “science-bashers,” set the shrill tone of this reaction and led to the appearance of a growing number of scare stories about an “antiscience” movement in the op-ed sections of newspapers across the country. Unwilling to be political scapegoats for the decline in the public funding of science and the erosion of the public authority of scientists, many of these critics—natural scientists, sociologists, anthropologists, historians, and scholars in cultural studies and literary studies—have taken the opportunity to respond to the backlash in Science Wars.
At a time when scientific knowledge is systematically whisked out of the domain of education and converted into private capital, the essays in this volume are sharply critical of the conservative defense of a value-free science. They suggest that in a world steeped in nuclear, biogenic, and chemical overdevelopment, those who are skeptical of technology are more than entitled to ask for evidence of rationality in those versions of scientific progress that respond only to the managerial needs of state, corporate, and military elites. Whether uncovering the gender-laden assumptions built into the Western scientific method, redefining the scientific claim to objectivity, showing the relationship between science’s empirical worldview and that of mercantile capitalism, or showing how the powerful language of science exercises its daily cultural authority in our society, the essays in Science Wars announce their own powerful message. Analyzing the antidemocratic tendencies within science and its institutions, they insist on a more accountable relationship between scientists and the communities and environments affected by their research.
Revised and expanded from a recent issue of Social Text, Science Wars will provoke thought and controversy among scholars and general readers interested in science studies and current cultural politics.

Andrew Ross is Professor and Director of the Graduate Program in American Studies at New York University and coeditor of Social Text.

Book Description Duke University Press, 1996. Paperback. Condition: Good. Good condition is defined as: a copy that has been read but remains in clean condition. All of the pages are intact and the cover is intact and the spine may show signs of wear. The book may have minor markings which are not specifically mentioned. Most items will be dispatched the same or the next working day. Seller Inventory # mon0009814232

Book Description Duke University Press, 1996. Condition: Good. This is an ex-library book and may have the usual library/used-book markings inside.This book has soft covers. In good all round condition. Seller Inventory # 8061919

Book Description Duke University Press. Paperback. Condition: Fair. A readable copy. All pages are intact, and the cover is intact. Pages can include considerable notes-in pen or highlighter-but the notes cannot obscure the text. At ThriftBooks, our motto is: Read More, Spend Less. Seller Inventory # G0822318717I5N00

Book Description Duke University Press. Paperback. Condition: Good. A copy that has been read, but remains in clean condition. All pages are intact, and the cover is intact. The spine may show signs of wear. Pages can include limited notes and highlighting, and the copy can include previous owner inscriptions. At ThriftBooks, our motto is: Read More, Spend Less. Seller Inventory # G0822318717I3N00

Book Description Duke University Press Books, 1996. Condition: Good. A+ Customer service! Satisfaction Guaranteed! Book is in Used-Good condition. Pages and cover are clean and intact. Used items may not include supplementary materials such as CDs or access codes. May show signs of minor shelf wear and contain limited notes and highlighting. Seller Inventory # 0822318717-2-4

There are 22 more copies of this book