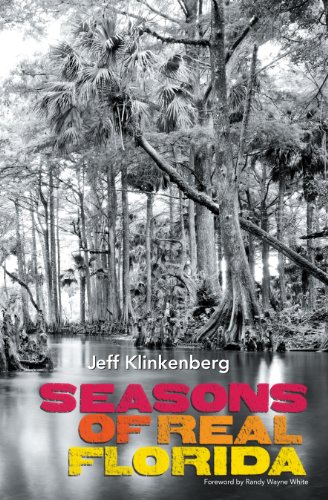 From the foreword:
"What is raw, alive, and essential about Florida is becoming more difficult to find, true; but it's still possible to encounter it, to experience it, and a good place to start is any story or book by Jeff Klinkenberg. . . . Jeff loves Florida. It shows."--Randy Wayne White, author of Shark River and Everglades

"Klinkenberg is a genius reporter and a wonderful writer. I read this book in one gulp, then went outside, looked at that magnificent Florida sky and made myself all sorts of promises."--William McKeen, author of Highway 61: A Father-and-Son Journey through the Middle of America

No wonder Jeff Klinkenberg loves Florida. At any time of year he can find a place in the state that's ripe to enjoy or a person whose story has aged to perfection.

Arranged by season, the book opens in the fall, which Klinkenberg says is like spring in the north--a time of celebration: "Having survived our harshest season, we feel renewed." Fair weather, good food, and the joys of nature lie ahead, described here in essays that are like time capsules of "old Florida values." Preserving the past, they reveal Klinkenberg's waggish appreciation of the state's history, folkways, and landscape, not to mention its barbequed ribs, smoked mullet, stone crab claws, and fresh lemonade.

Many pieces focus off the beaten path and on modern rogues who seem to turn their backsides to the subdivisions and shopping malls that pave the state: Miss Ruby, whose fruit stand features rutabagas, boiled peanuts, and her own brightly colored plywood paintings; an 85-year-old resident of the remote island of Cayo Costa who hums Beethoven while she hunts for shells; the scientists who test mosquito repellent in Everglades National Park; and the unofficial caretaker of Lilly Spring on the Santa Fe River, who greets canoeists wearing glasses, a necklace, and on occasion a synthetic fur loincloth. Other pieces pay homage to Klinkenberg's literary heroes who've written in and about Florida, such as Pulitzer Prize-winner Marjorie Kinnan Rawlings, Rawlings's companion and memoirist Idella Parker, Everglades crusader Marjory Stoneman Douglas, and novelist Ernest Hemingway. Klinkenberg also revisits an old St. Johns River campsite of 19th-century botanist William Bartram, whose encounters with alligators there were as alarming as Klinkenberg's with beer cans and soda bottles.

For anyone who has a stake in the real Florida--resident, tourist, naturalist, or newcomer--this tour of the seasons will linger in memory like the aroma of orange blossoms on a clear winter night.

"Winter in Florida smells of orange blossoms, while spring brings long mornings of fly-fishing. Summer saunters in like a breeze beneath a shade tree, and to the uninitiated, fall creeps in without notice. . . . Klinkenberg uncovers the beauty and mystery of his home state."--Southern Living

"Reminds you of hopping in the back of a friend’s truck for a ride. But this one takes you beyond the sunny skies and high-rises and into the past."--Miami Herald

"The real Florida is a state on the verge of extinction, a weird, quirky world threatened by too many people, too many strip malls, too much modern life. . . . [Klinkenberg] preserves the real Florida, warts and all, before it disappears forever."--St. Petersburg Times

"A skilled writer, he knows when to listen and when to nudge each short story along."--Publishers Weekly

Anytime and anywhere, Jeff Klinkenberg can find a place to enjoy or a person with an irresistible story. Staying mostly off the beaten path, focusing on modern rogues who turn their backs on subdivisions and theme parks, he also finds time to write about his literary and environmental heroes. "If Jeff Klinkenberg isn’t careful," says Carl Hiaasen, "he might give journalism a good name."

Florida native Jeff Klinkenberg has been writing for the St. Petersburg Times since 1977. He is the only two-time winner of the Paul Hansell Distinguished Journalism Award, the highest honor given by the Florida Society of Newspaper Editors.

Book Description University Press of Florida, 2004. Condition: Good. A+ Customer service! Satisfaction Guaranteed! Book is in Used-Good condition. Pages and cover are clean and intact. Used items may not include supplementary materials such as CDs or access codes. May show signs of minor shelf wear and contain limited notes and highlighting. Seller Inventory # 0813027136-2-4

4. Seasons of Real Florida (The Florida History and Culture Series)

5. Seasons of Real Florida (The Florida History and Culture Series)

Book Description University Press of Florida, 2004. Hardcover. Condition: Good. Connecting readers with great books since 1972. Used books may not include companion materials, some shelf wear, may contain highlighting/notes, may not include cdrom or access codes. Customer service is our top priority!. Seller Inventory # S_271431387

9. Seasons of Real Florida (The Florida History and Culture Series)