Home John Ward The Secret of the Alchemist (The Fate of the Stone Trilogy) (The... 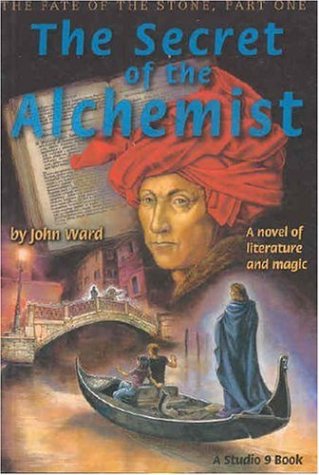 Synopsis: This is the first novel in the Fate of the Thaumatophane trilogy (pronounced TOW/MAY/TOW/FAIN or TOW/MAY/TOW/FAN). The Thaumatophane was a magical machine sought after by the alchemists of the Middle Ages, an all-powerful invention that not only turned lead into gold but gave omnipotence to its possessor. In this first in the trilogy, two teenagers, Jake and Helen, meet by chance at a literary festival in Florence, Italy, where the contestants have to recite passages written by Dante, the Italian renaissance poet. They soon become fast friends: Helen, daughter of a failed marriage between a somewhat seedy Irish art dealer and a Swiss heiress has been raised by her aunts in the chill and reserved world of Swiss chateaux and private schools. A loner, wary of opening herself to others, she longs for her London-based dad to pay more attention to her. Jake, from a rowdy Scottish-Italian Glasgow family, is a happy-go-lucky jack-in-the-box kind of guy, not a great intellectual but with a good solid head on his pragmatic shoulders. Together, they make a fine pair.

Very quickly they fall into a world of practitioners of black magic and the occult arts, for Helen's father has borrowed a 16th-century painting called "The Secret of the Alchemist" from her aunts' private collection and thinks he can hold his buyer up for a higher price by pretending to lose it for a few weeks. He meanwhile smuggles it out of Switzerland and secretes it in Venice, leaving the key for his daughter to find in an ornate desk he ships to Florence for repairs.

The alchemist of the painting is Ruggiero de Montefeltro, an Englishman who went to Italy in the 16th century and began to learn the secrets of the occult at the hands of a magician in order to lay his hands on the Thaumatophane. His own fate is left unclear until the apocalyptic finish to this riveting novel, which takes place in an ancient house in Provence where the very Gates of Hell are opened.

About the Author: John Ward was born in Clydebank, Scotland, in 1956. He was raised in Perth, went to school in Dundee and to university in Edinburgh, where he studied philosophy and English. He turned both to good account, using the philosophy to reconcile himself to the vicissitudes of earning his living as an English teacher for twenty years, first at the Royal High School in Edinburgh and then at Inverness College.

His appetite for fiction was whetted by scripting educational programmes for BBC radio. I discovered that you earned more if the script was fully dramatized, so I made sure mine always were. You never forget the thrill of hearing characters you have created brought to life--or of receiving a repeat fee for a second broadcast.

Even the consolations of philosophy wear thin at last, and in 1999 he decided that a new millennium called for a new direction in life. He gave up teaching to make a serious attempt to write down some at least of the stories that have been in my head for ages. His aim is to write the kind of fiction he enjoys himself--stories with a tinge of the fantastic, a suggestion of other, stranger worlds lurking beneath the tranquil-seeming surface of everyday reality. I suppose that's the philosophy again--the old contradiction of appearance and reality, the disturbing feeling that perhaps nothing is as it seems.

He rebels against the category of children's fiction--good fiction gives pleasure at any age, but sadly many adults think of reading imaginative literature as something they have outgrown. Some of the most original and challenging writing today is on the children's shelves.

John Ward lives in Inverness, Scotland. He has been married forever and has four children, whom he considers his most valuable and perceptive critics. The Fate of the Thaumatophane trilogy is his first published fiction.

Title: The Secret of the Alchemist (The Fate of the...
Publisher: Studio 9
Publication Date: 2003
Binding: Paperback
Book Condition: New
Edition: 1St Edition - may be Reissue.

Book Description Studio 9. Paperback. Condition: Very Good. A copy that has been read, but remains in excellent condition. Pages are intact and are not marred by notes or highlighting, but may contain a neat previous owner name. The spine remains undamaged. At ThriftBooks, our motto is: Read More, Spend Less. Seller Inventory # G1552070344I4N00

2. The Secret of the Alchemist (The Fate of the Stone Trilogy Part One)

4. The Secret of the Alchemist A Novel of Literature and Magic

Book Description Studio 9 Books, Plattsburgh, New York, U.S.A., 2003. Paperback. Condition: Fine. No Jacket. First Edition. Fine black color pictorial trade paperback. (2003), 8vo, 54pp. "What would you do if your father sent you a key that could unlock the most powerful secret of the ancient world?" The Secret of the Alchemist is Part One of The Fate of the Stone Trilogy.". Seller Inventory # 012949

7. The Secret of the Alchemist