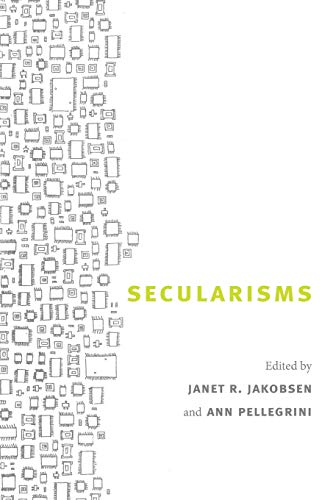 Synopsis: At a time when secularism is put forward as the answer to religious fundamentalism and violence, Secularisms offers a powerful, multivoiced critique of the narrative equating secularism with modernity, reason, freedom, peace, and progress. Bringing together essays by scholars based in religious studies, gender and sexuality studies, history, science studies, anthropology, and political science, this volume challenges the binary conception of “conservative” religion versus “progressive” secularism.

With essays addressing secularism in India, Iran, Turkey, Great Britain, China, and the United States, this collection crucially complicates the dominant narrative by showing that secularism is multifaceted. How secularism is lived and experienced varies with its national, regional, and religious context. The essays explore local secularisms in relation to religious traditions ranging from Islam to Judaism, Hinduism to Christianity. Several contributors explicitly take up the way feminism has been implicated in the dominant secularization story. Ultimately, by dislodging secularism’s connection to the single (and singular) progress narrative, this volume seeks to open spaces for other possible narratives about both secularism and religion—as well as for other possible ways of inhabiting the contemporary world.

From the Publisher: "Do you think you already know what secularism means? One virtue of this book is that the authors examine several modes and dimensions of secularism in different places, always closely attentive to the specific religious practices with which it is imbricated. Another is that the essays, taken together, loosen up the political imagination, allowing us to think outside the two-slot system--`either secularism or theocracy'--which has such debilitating effects on political thought. An admirable collection of essays."--William E. Connolly, author of Capitalism and Christianity, American Style

Book Description Brand: Duke University Press Books, 2008. Paperback. Condition: GOOD. Has little wear to the cover and pages. Contains some markings such as highlighting and writing. Supplemental materials are not guaranteed with any used book purchases. Seller Inventory # 0822341492_abe_gd

Book Description Duke University Press, 2008. Condition: Good. A+ Customer service! Satisfaction Guaranteed! Book is in Used-Good condition. Pages and cover are clean and intact. Used items may not include supplementary materials such as CDs or access codes. May show signs of minor shelf wear and contain limited notes and highlighting. Seller Inventory # 0822341492-2-4