Home Ed McBain Give the Boys a Great Big Hand 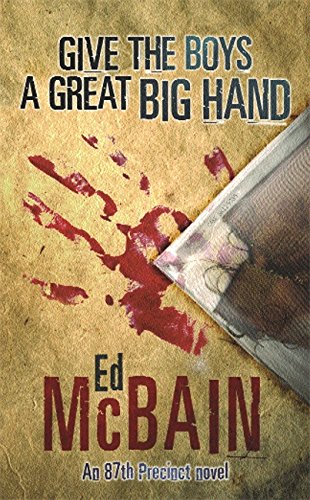 Give the Boys a Great Big Hand

Synopsis: Kill me if you can - that was Pepe Miranda's challenge. Murderer, two-bit hero of the street gangs, he was holed up somewhere in the 87th Precinct, making the cops look like fools and cheered on by every neighbourhood punk. It was not a challenge Lieutenant Pete Byrnes and the detectives in the squad room could leave alone. Not in the sticky, July heat of the city with the gangs just waiting to explode into violence ...

Book Description Orion 02/09/2004, 2004. Paperback. Condition: Very Good. Shipped within 24 hours from our UK warehouse. Clean, undamaged book with no damage to pages and minimal wear to the cover. Spine still tight, in very good condition. Remember if you are not happy, you are covered by our 100% money back guarantee. Seller Inventory # 6545-9780752863795

Book Description Paperback. Condition: Fair. A readable copy of the book which may include some defects such as highlighting and notes. Cover and pages may be creased and show discolouration. Seller Inventory # GOR003448261

Book Description Paperback. Condition: Good. The book has been read but remains in clean condition. All pages are intact and the cover is intact. Some minor wear to the spine. Seller Inventory # GOR001652723

Book Description Paperback. Condition: Very Good. The book has been read, but is in excellent condition. Pages are intact and not marred by notes or highlighting. The spine remains undamaged. Seller Inventory # GOR001630971

Book Description -. Paperback. Condition: Very Good. See Them Die This book is in very good condition and will be shipped within 24 hours of ordering. The cover may have some limited signs of wear but the pages are clean, intact and the spine remains undamaged. This book has clearly been well maintained and looked after thus far. Money back guarantee if you are not satisfied. See all our books here, order more than 1 book and get discounted shipping. Seller Inventory # 7719-9780752863795

Book Description Orion 2004-01-01, 2004. Paperback. Condition: Very Good. Item is in very good condition. If supplemental codes/CDs for textbooks are required please contact us prior to purchasing as they may be missing. Seller Inventory # DS-0752863797-2