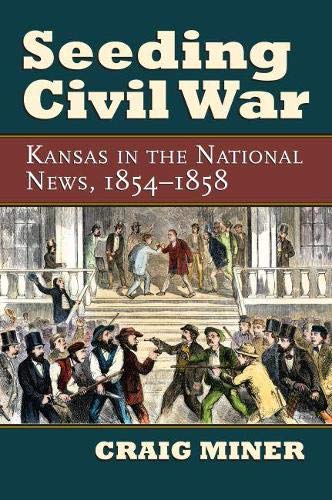 Following the passage of the Kansas-Nebraska Act, Kansas Territory was a national issue that dominated America's press, not to mention three sessions of Congress. Hundreds of thousands of articles and editorials—4,500 in the New York Herald alone—were published about Bleeding Kansas during those four tumultuous years leading up to the Lecompton Constitution. Craig Miner now offers the first in-depth study of national media coverage devoted to the beleaguered territory, unearthing new examples of what Americans were saying about Kansas and showing how those words affected the course of national events.

Miner draws on dozens of newspapers and magazines from all parts of the country and of all political persuasions: a trove of rich quotations and unvarnished epithets, nearly all of them published here for the first time. He reveals how the heated, polarizing rhetoric widened the sectional rift, weakened chances of accommodation, and contributed more to the onset of civil war than has been previously recognized.

Miner shows what a tremendous obsession Kansas was for the nation-a whipping boy for sectional and political emotions-and how thoroughly it dominated the press in cities large and small, North and South. He argues convincingly that the endless, seemingly fruitless debate was important more because of the way events were discussed than because of the significance of the events themselves and that it contributed to the cynicism that made war inevitable-for some, even desirable. Along the way, he addresses such topics as the vagaries of voting as a democratic solution to moral divisions, the Kansas issue as a religious debate, the media creation of martyrs, and Kansas governors as examples of leadership, for good or ill.

After reading Seeding Civil War, Kansans will never be able to regard Lawrence and Lecompton the same way again, while national readers will gain surprising insights about their own towns during this critical time—and experience firsthand the unfolding of a national disaster.

"An ambitious and important recasting of the Kansas conflict within the context of American popular culture during the 1850s. Miner's sweep is impressively broad, and his survey of editorial opinion is remarkably thorough and inclusive. . . . A genuine contribution to the literature that meets a longstanding need and greatly enhances our understanding of the Kansas conflict's broad political and cultural reverberations."--Kenneth J. Winkle, coauthor of The Oxford Atlas of the Civil War