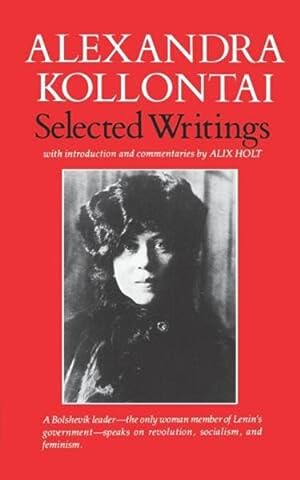 Quantity: 5
View all  copies of this book
Buy New
Price: US$ 19.16 Convert Currency
Shipping: US$ 2.64 Within U.S.A. Destination, rates & speeds
Add to basket

“Alix Holt, in her careful, objective comments on the life and work of Miss Kollontai, has served her subject well. . . .She has given us this chance to become acquainted with the thought of a woman liberated before her time.” ―New York Times Book Review

Alexandra Kollontai―the only woman member of the Bolshevik central committee and the USSR’s first Minister of Social Welfare―is known today as a historic contributor to the international women’s movement, and as one of the first Bolshevik leaders to oppose the growth of the bureaucracy in the young socialist state. Her Selected Writings discuss the social democratic movement before the First World War, the history of the Russian women’s movement, and the debate between “feminist” and “socialist” women; the effects of the war on European socialism; the revolutions; the part played by women in the revolutionary events; the early manifestations of bureaucracy and Kollontai’s role as spokeswoman for the “workers’ opposition”; and morality, sexual politics, the family, and prostitution. It also includes writings from her later life as a Soviet official. Each section is introduced by a commentary in which Alix Holt explains the background and critically sets Kollontai’s unique lifework in its historical and biographical contexts, demonstrating both its necessary limitations and its extraordinary range.
Language Notes:
Text: English, Russian (translation)