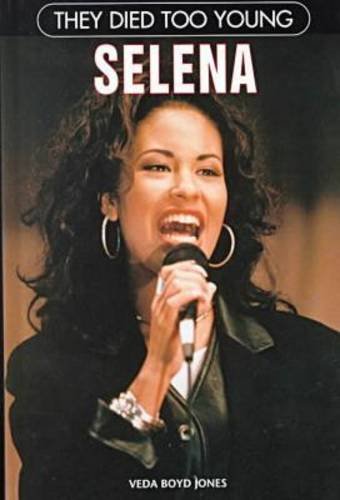 Selena (They Died Too Young)

Synopsis: Discusses the life and work of the award-winning Texas singer who had begun to popularize Tejano music when she was shot and killed by the president of her fan club

From School Library Journal: Gr 6-9-Jones manages a brief but cohesive narrative of the Tejano star's life and untimely death at the hands of her fan-club manager. Diaz is marred by suppositions about how she might have made certain career choices. For example, in discussing her decision to accept a role in Charlie's Angels, the author states, "-the $12 million paycheck couldn't have hurt-." That's fine, as far as it goes, but this device and tone are repeated throughout. The author quotes Diaz as being concerned about whether, as an actor, she could live with the over-the-line crudeness in her hit There's Something About Mary. This is followed up by the supposition that since the film was a success, she was probably able to live with it. The copyediting is also sloppy-Being John Malkovich director Spike Jonze's name is spelled both correctly and incorrectly in the same photo caption. The books have vivid colors and hip typography, but the cover photo of Diaz is amazingly unflattering. All of the photos are full color, and come from all of the standard public-domain sources. Joe Nick Patoski's Selena: Como la Flor (Boulevard, 1997) is the definitive biography, and is accessible to the same audience as Jones's book. Anne E. Hill's Cameron Diaz (Chelsea, 1999) offers much of the same information.

1. Selena (They Died Too Young)

Book Description Facts On File, Incorporated. Library Binding. Condition: Good. A copy that has been read, but remains in clean condition. All pages are intact, and the cover is intact. The spine may show signs of wear. Pages can include limited notes and highlighting, and the copy can include previous owner inscriptions. An ex-library book and may have standard library stamps and/or stickers. At ThriftBooks, our motto is: Read More, Spend Less. Seller Inventory # G0791052303I3N10

Book Description Facts On File, Incorporated. Library Binding. Condition: Fair. A readable copy. All pages are intact, and the cover is intact. Pages can include considerable notes-in pen or highlighter-but the notes cannot obscure the text. At ThriftBooks, our motto is: Read More, Spend Less. Seller Inventory # G0791052303I5N00

Book Description Facts On File, Incorporated. Library Binding. Condition: Very Good. A copy that has been read, but remains in excellent condition. Pages are intact and are not marred by notes or highlighting, but may contain a neat previous owner name. The spine remains undamaged. At ThriftBooks, our motto is: Read More, Spend Less. Seller Inventory # G0791052303I4N00

5. Selena (They Died Too Young)

Book Description Chelsea House Pub, 2000. Condition: Good. A+ Customer service! Satisfaction Guaranteed! Book is in Used-Good condition. Pages and cover are clean and intact. Used items may not include supplementary materials such as CDs or access codes. May show signs of minor shelf wear and contain limited notes and highlighting. Seller Inventory # 0791052303-2-4

6. Selena (They Died Too Young)