Items related to The Serpent's Shadow (The Elemental Masters) 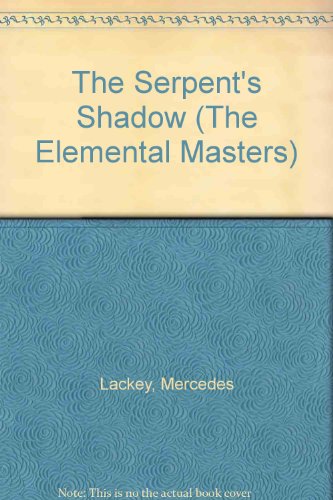 The Serpent's Shadow (The Elemental Masters)

After the murder of her parents by mysterious magical forces, Maya Witherspoon seeks refuge in London, struggling to master the magical gifts inherited from her mother, a former priestess, before the dark forces can claim her as their prey.

Mercedes Lackey returns to form in The Serpent's Shadow, the fourth in her sequence of reimagined fairy tales. This story takes place in the London of 1909, and is based on "Snow White and the Seven Dwarfs." Lackey creates echoes of Sir Arthur Conan Doyle, pays affectionate homage to Dorothy Sayers's Lord Peter Wimsey (who plays an important role under a thin disguise), and turns the dwarves into seven animal avatars who masquerade as pets of her Eurasian heroine, Maya.

Some of Maya's challenges come from the fact that she is not "snow white," and she has fled India for her father's English homeland after the suspicious deaths of her parents. Establishing her household in London, she returns to her profession as a physician, working among the poor. Her "pets" and loyal servants stand guard, and Maya herself uses what bits of magic she managed to pick up in childhood to weave otherworldly defenses as well. But the implacable enemy who killed her parents has come to London to search for her; if Maya can be enslaved, her enormous potential powers can be used to the enemy's ends. Fortunately, English magicians of the White Lodge have also noted a new, powerful presence in their midst, though they're having trouble locating her, too. They send Peter Scott, a Water Master, to track her down. He finds Maya beautiful and benign, and is determined to teach her to use the Western magic she is heir to, before her enemy discovers her.

Some will find the author's Kiplingesque descriptions of India and Hindustani culture offensive. Lackey describes Maya's enemy as a powerful devotee of the goddess Kali-Durga, though she carefully shows that the avatars of the other deities will not attack her, and has Kali-Durga repudiate her servant in the climactic confrontation. And, though the story is layered, its surface is as glossy and brightly colored as an action comic. But readers who enjoy late Victorian London, Sayers, Sherlock Holmes stories, and a page-turning tale will want to take this one home. --Nona Vero