Items related to The Seven Husbands of Evelyn Hugo: A Novel 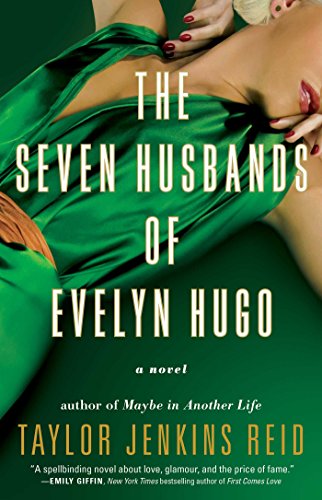 The Seven Husbands of Evelyn Hugo: A Novel

The book has been read, but is in excellent condition. Pages are intact and not marred by notes or highlighting. The spine remains undamaged. Seller Inventory # CIN000381170

Title: The Seven Husbands of Evelyn Hugo: A Novel

“Riveting, heart-wrenching, and full of Old Hollywood glamour, The Seven Husbands of Evelyn Hugo is one of the most captivating reads of 2017.” –Buzzfeed

“The epic adventures Evelyn creates over the course of a lifetime will leave every reader mesmerized. This wildly addictive journey of a reclusive Hollywood starlet and her tumultuous Tinseltown journey comes with unexpected twists and the most satisfying of drama.” —PopSugar

In this entrancing novel “that speaks to the Marilyn Monroe and Elizabeth Taylor in us all” (Kirkus Reviews), a legendary film actress reflects on her relentless rise to the top and the risks she took, the loves she lost, and the long-held secrets the public could never imagine.

Aging and reclusive Hollywood movie icon Evelyn Hugo is finally ready to tell the truth about her glamorous and scandalous life. But when she chooses unknown magazine reporter Monique Grant for the job, no one is more astounded than Monique herself. Why her? Why now?

Monique is not exactly on top of the world. Her husband has left her, and her professional life is going nowhere. Regardless of why Evelyn has selected her to write her biography, Monique is determined to use this opportunity to jumpstart her career.

Summoned to Evelyn’s luxurious apartment, Monique listens in fascination as the actress tells her story. From making her way to Los Angeles in the 1950s to her decision to leave show business in the ‘80s, and, of course, the seven husbands along the way, Evelyn unspools a tale of ruthless ambition, unexpected friendship, and a great forbidden love. Monique begins to feel a very real connection to the legendary star, but as Evelyn’s story near its conclusion, it becomes clear that her life intersects with Monique’s own in tragic and irreversible ways.

“Heartbreaking, yet beautiful” (Jamie Blynn, Us Weekly), The Seven Husbands of Evelyn Hugo is “Tinseltown drama at its finest” (Redbook): a mesmerizing journey through the splendor of old Hollywood into the harsh realities of the present day as two women struggle with what it means—and what it costs—to face the truth.

An Amazon Best Book of June 2017: Imagine if Mariyln Monroe lived to be 79 years old, decided to write a tell-all book, and plucked you (assuming you’re an unknown journalist) out of obscurity to write it. Such is the premise of The Seven Husbands of Eveyln Hugo, and it’s fascinating. In this page-turner a star is born, but her path to success is laden with grit, grief and deceit. Alternating between Eveyln’s first-hand account of her journey to stardom and the observations of Monique, the woman mysteriously selected to pen Eveyln’s biography, the novel questions whether fame is worth the price. The stories of Eveyln, her seven husbands and their friends, lovers and confidants intertwine to spin up a glamour tornado powered by sex, love, money and Hollywood gossip. This book is captivating, sexy, and at times, heart wrenching. Readers will delight in the glitz and intrigue, and be pleasantly surprised by the complex, thought-provoking twist. In summary, put it in your beach bag. You will thank me later. --Shannon Deveny

In 2002, World of Books Group was founded on an ethos to do good, protect the planet and support charities by enabling more goods to be reused. Since then, we've grown into to a global company pioneering the circular economy. Today, we drive the circular economy through three re-commerce brands: - Wob: Through Wob, we sell. We provide affordable, preloved books and media to customers all over the world. A book leaves our collection of over seven million titles and begins a new chapter every two seconds, enabling more goods to be reused. - Ziffit: Through Ziffit, we buy. We give people around the world the opportunity to contribute to the circular economy, earn money and protect the planet, by trading their unwanted books and media. - Shopiago: Through Shopiago, we help others. By sharing the technology that has grown World of Books Group into the business it is today, we?re helping charities increase revenue and reduce waste through re-commerce.


WorldofBooks.com fully embraces the AbeBooks terms and conditions and we will do what we can to resolve any issues.


Orders ship within 2 business days. Shipping costs are based on books weighing 2.2 LB, or 1 KG. If your book order is heavy or oversized, we may contact you to let you know extra shipping is required.
We are only shipping to the US currently. Any order placed from outside the United States will automatically refunded.