Home Virginia Burrus The Sex Lives of Saints: An Erotics of Ancient Hagiography (... 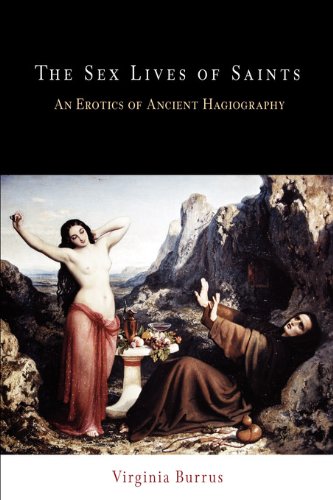 Has a repressive morality been the primary contribution of Christianity to the history of sexuality? The ascetic concerns that pervade ancient Christian texts would seem to support such a common assumption. Focusing on hagiographical literature, Virginia Burrus pursues a fresh path of interpretation, arguing that the early accounts of the lives of saints are not antierotic but rather convey a sublimely transgressive "countereroticism" that resists the marital, procreative ethic of sexuality found in other strands of Christian tradition.

Without reducing the erotics of ancient hagiography to a single formula, The Sex Lives of Saints frames the broad historical, theological, and theoretical issues at stake in such a revisionist interpretation of ascetic eroticism, with particular reference to the work of Michel Foucault and Georges Bataille, David Halperin and Geoffrey Harpham, Leo Bersani and Jean Baudrillard. Burrus subsequently proceeds through close, performative readings of the earliest Lives of Saints, mostly dating to the late fourth and early fifth centuries—Jerome's Lives of Paul, Malchus, Hilarion, and Paula; Gregory of Nyssa's Life of Macrina; Augustine's portrait of Monica; Sulpicius Severus's Life of Martin; and the slightly later Lives of so-called harlot saints. Queer, s/m, and postcolonial theories are among the contemporary discourses that prove intriguingly resonant with an ancient art of "saintly" loving that remains, in Burrus's reading, promisingly mobile, diverse, and open-ended.

About the Author: Virginia Burrus is the Bishop W. Earl Ledden Professor of Religion at Syracuse University. She is author of Ancient Christian Ecopoetics and Saving Shame: Martyrs, Saints, and Other Abject Subjects, both available from the University of Pennsylvania Press.

Book Description Brand: University of Pennsylvania Press, 2003. Hardcover. Condition: VERY GOOD. Pages are intact and are not marred by notes or highlighting, but may contain a neat previous owner name. The spine remains undamaged. Supplemental materials are not guaranteed with any used book purchases. Seller Inventory # 0812237455_abe_vg

Book Description University of Pennsylvania Press, 2003. Condition: Good. A+ Customer service! Satisfaction Guaranteed! Book is in Used-Good condition. Pages and cover are clean and intact. Used items may not include supplementary materials such as CDs or access codes. May show signs of minor shelf wear and contain limited notes and highlighting. Seller Inventory # 0812237455-2-4

8. Sex Lives Of Saints An Erotics Of Ancien