Items related to Shakespearean Metadrama The Argument of the Play in... 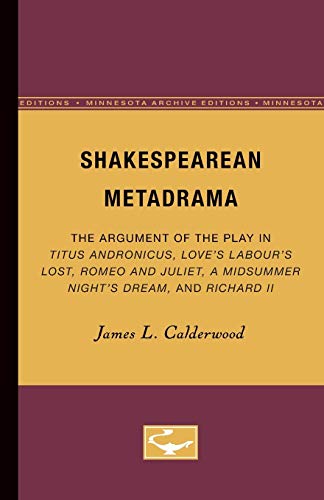 Shakespearean Metadrama The Argument of the Play in Titus Andronicus, Loves Labours Lost, Romeo and Juliet, A Midsummer Nights Dream, and Richard II

Quantity: 1
View all  copies of this book
Buy New
Price: US$ 45.17 Convert Currency
Free Shipping Within U.S.A.
Save on shipping

Title: Shakespearean Metadrama The Argument of the ...

In a new approach to Shakespeare criticism, the author interprets five of Shakespeare's early plays as metadramas, dramas that are not only about the various moral, social, political, and other thematic issues with which critics have so long been concerned but also about the plays themselves. Professor Calderwood demonstrates that in these five plays Shakespeare writes about his dramatic art -- its nature, its media of language and theater, its generic forms and conventions, its relationship to truth and the social order.

In an introductory chapter the author explains his theory of metadrama, placing it in a general critical context as well as in the specific framework of Shakespeare's plays. He distinguishes between the meaning of metadrama and the similar terms "metaplay" and "metatheare." He points out that the dominant metadramatic aspect of the five plays under study is the interplay of language and action in drama. A separate chapter is devoted to the interpretation of each of the plays.

Professor Calderwood is aware that in presenting his critical theory and interpretations he may be met with skepticism by other scholars and critics. He anticipates such a situation in the introduction: "To the critic trying on introductory styles for a book on Shakespearean metadrama," he writes, "the plight of Falstaff at the Boar's Head Tavern comes all to readily to mind. 'What trick," he must ask himself, 'what device, what starting-hole, canst thou now find out to hide thee from this open and apparent shame?'"

Minnesota Archive Editions uses digital technology to make long-unavailable books once again accessible to scholars, students, researchers, and general readers. Rich with historical and cultural value, these works are published unaltered from the original University of Minnesota Press editions. The books offered through Minnesota Archive Editions are produced in limited quantities according to customer demand and are available through select distribution partners.

We first started out as ?The Paperback Exchange,? a chain of physical bookstores where we would part exchange your beloved books for new stories to transport you to faraway places. However, as shopping started to evolve to online shops and marketplaces, we bid our stores goodbye to become ?PBShop.? This transition has only allowed us to blossom as we now ship thousands of titles to book lovers across the globe. We pride ourselves in being a community of local book lovers which allows our passion and devotion to shine in everything we do. In 2020 we not only celebrated our 20th birthday but our 1st birthday as being completely employee owned after becoming an E.O.T in September 2019. We are proud to be different and embrace standing apart on a book mountain by working from a virtual inventory which allows us to provide thousands of books that may be difficult to get for your bookshelf or your studies. Working with a number of different suppliers allows us to explore other avenues such as puzzles, sheet music and even stationery so we really do have something for everyone. Life is about being versatile in all realms of existence. If this is your first visit or you are a returning customer, we would like to welcome you to the PBShop family, for there is no friend as loyal as a book. We are a company who put our customers at the centre of everything we do as we understand the importance of reading because once you learn to read, you will forever be free. There are a whole lot of things in this world of ours that we are yet to explore, which is why we will forever inspire curious minds.

Returns requested beyond this time will not be authorised.

Our team will provide full instructions on how to return your order and once received our returns department will process your refund.
Please note the cost to return any...


Books are shipped from UK warehouse. Delivery thereafter is between 4 and 14 business days dependant upon your location - please do contact us with any queries you may have.