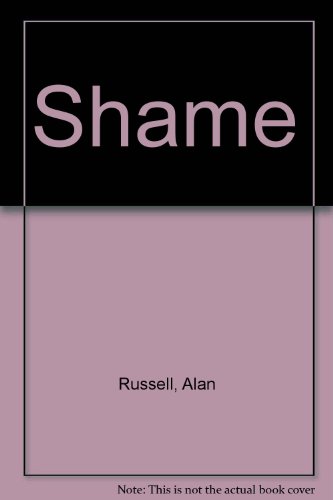 A very crisp and clean signed first edition, almost new and unread condition! Gift Quality! Signed by the author on the second page! Dj is nicely preserved in a brand new protective mylar plastic cover! 304 very fine, unmarked and uncreased suspense-filled pages! "Mystery insiders have long savored Alan Russell. He has always been regarded as a great storyteller and a master at spinning a plot. His last novel, Multiple Wounds, was a haunting tale of psychological suspense, nominated for both the Anthony and Macavity awards for best mystery novel of the year. Now, with Shame, Russell proves once again that he is among the elite writers of suspense, creating a terrifying serial killer whose victims include not only the dead but also his survivors." Size: 8vo - over 7ľ" - 9ľ" tall. Bookseller Inventory # 023516

Caleb Parker has been on the run from his past ever since his father, a serial murderer known by the name of Shame, was electrocuted by the state of Florida. Wishing for nothing more than to start life anew and away from the dark shadows of his past, Caleb tries to distance himself from his father’s legacy by moving to California. But even when he’s far from his father’s killing grounds, the past catches up with Caleb when a new series of murders occurs―reminiscent of Shame’s brutal handiwork. Once more Caleb is thrust into the spotlight―only this time as the prime suspect. With the police hungry to convict him, Caleb seeks help from true-crime author Elizabeth Line, the very writer who became renowned by first surviving his father’s terrible crimes, and then documenting them.

Shame is a nail-biting tour de force that will leave listeners glued to their seats.


Tess Gerritsen: The last time we talked you interviewed me for a newspaper column, but now I get to interview you.

TG: Actually, winters are my most productive time to write. And speaking of hibernation I understand you’ve emerged from it with a new book (Burning Man).

AR: Not only a new book, but the reissuing of Multiple Wounds and Shame.

TG: I missed Shame the first time around. What’s it about?

AR: My first insight into writing the book occurred when I read about Ted Bundy fathering a child while in prison. That got me to thinking about how terrible it would be to be the child of a serial murderer.

TG: So much for a normal childhood.

AR: Exactly. Given that circumstance, I figure I’d want to escape the sins of the father as soon as I could. And that’s what my protagonist does.

TG: Let me guess, he’s not able to escape his past?

AR: Even though he has tried to carve out a life outside of his father’s shadow, it’s always there. His wife and children have no idea about his past, but it still taints him. The past catches up with him when a series of murders occur with his father’s M.O. Suddenly, he’s not only outed, he’s the prime suspect.

TG: That doesn’t sound like an easy book to write.

AR: It was the book from hell. I was on deadline and for the only time in my life I was late. In order to make the book right, I had to balance the past of the father with the present of the son. I also found it necessary to have not one major protagonist, but three. I brought in a true crime author whose career path was started when she survived the father’s visit to her sorority and he spared her life. And filling out the triumvirate is a drag queen.

TG: Dare I ask if that’s something you have personal experience with?

AR: The only time I’ve been in drag was when I played the role of Mother Ginger in the West Coast Ballet Company’s performances of the Nutcracker. And no, I’m not a dancer. The only reason I was in that production is that I’m 6’ 7” and they needed a tall performer to hide all the little dancers under a huge hoop skirt. Someone recommended me for my height, and though I was terrified at the prospect of performing as a writer I couldn’t say no to such an experience.

TG: Do you have pictures?.

AR: You wouldn’t want to see them. I was not an attractive woman. My oldest son claims he still has PTSD from seeing me dressed that way.

TG: Do you still think of Shame as your book from hell?

AR: I must admit I really enjoyed rereading it. I guess enough time passed to forget the pain. It must be like women with childbirth. And speaking of childbirth, even when you were a practicing doctor and the mother of two you kept up a demanding writing regimen and still do. What’s your secret?

TG: Sheer stubbornness and an obsessive-compulsive streak. I hate missing deadlines, so I stay at my desk until it's done.