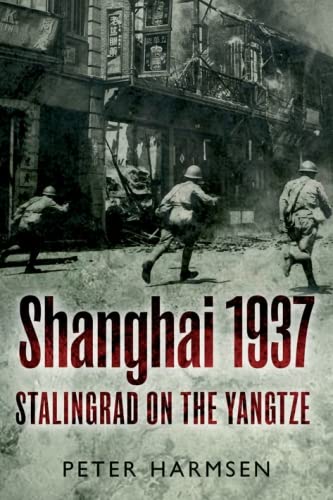 Shanghai 1937: Stalingrad on the Yangtze

Synopsis: This deeply researched book describes one of the great forgotten battles of the 20th century. At its height it involved nearly a million Chinese and Japanese soldiers, while sucking in three million civilians as unwilling spectators and, often, victims. It turned what had been a Japanese adventure in China into a general war between the two oldest and proudest civilizations of the Far East. Ultimately, it led to Pearl Harbor and to seven decades of tumultuous history in Asia. The Battle of Shanghai was a pivotal event that helped define and shape the modern world.

In its sheer scale, the struggle for China’s largest city was a sinister forewarning of what was in store for the rest of mankind only a few years hence, in theaters around the world. It demonstrated how technology had given rise to new forms of warfare, or had made old forms even more lethal. Amphibious landings, tank assaults, aerial dogfights and most importantly, urban combat, all happened in Shanghai in 1937. It was a dress rehearsal for World War II—or perhaps more correctly it was the inaugural act in the war—the first major battle in the global conflict.

Actors from a variety of nations were present in Shanghai during the three fateful autumn months when the battle raged. The rich cast included China's ascetic Generalissimo Chiang Kai-shek and his Japanese adversary, General Matsui Iwane, who wanted Asia to rise from disunity, but ultimately pushed the continent toward its deadliest conflict ever. Claire Chennault, later of “Flying Tiger” fame, was among the figures emerging in the course of the campaign, as was First Lady Eleanor Roosevelt. In an ironic twist, Alexander von Falkenhausen, a stern German veteran of the Great War, abandoned his role as a mere advisor to the Chinese army and led it into battle against the Japanese invaders.

Written by Peter Harmsen, a foreign correspondent in East Asia for two decades, and former bureau chief in Taiwan for the French news agency AFP, Shanghai 1937 fills a gaping chasm in our understanding of the Second World War.

About the Author: Peter Harmsen has been a foreign correspondent in East Asia for two decades for international media organizations such as the Economist Intelligence Unit, Bloomberg and AFP.

Book Description Casemate, 2013. Hardcover. Condition: Good. Item may show signs of shelf wear. Pages may include limited notes and highlighting. May include supplemental or companion materials if applicable. Access codes may or may not work. Connecting readers since 1972. Customer service is our top priority. Seller Inventory # mon0002029270

Book Description Casemate Publishers, Havertown, PA, 2013. Hardcover. Condition: Very Good to Near Fine. Dust Jacket Condition: Very Good. 'One of the forgotten battles of the 20th century, and a harbinger of the global conflagration to come." Illustrated. 310 pages with index. Book is in VERY GOOD to NEAR FINE condition. Dust jacket is in VERY GOOD or better condition. Seller Inventory # 013980

Book Description Casemate Publishers & Book Distributors, LLC. Hardcover. Condition: As New. An apparently unread copy in perfect condition. Dust cover is intact; pages are clean and are not marred by notes or folds of any kind. At ThriftBooks, our motto is: Read More, Spend Less. Seller Inventory # G161200167XI2N00

Book Description Casemate, 2013. Hardcover. Condition: Near Fine. 1st Edition. This first printing of 310 pages, profusely illustrated with photographs, is tight, bright, and clean. It is near fine because of a white sticker at the top of the fep, probably cover the previous owner's name. The dust jacket is fine plus. Seller Inventory # 24186

Book Description Casemate Books, 2013. Hardcover. Condition: Good. Ex library copy with usual stamps/stickers Good condition is defined as: a copy that has been read but remains in clean condition. All of the pages are intact and the cover is intact and the spine may show signs of wear. The book may have minor markings which are not specifically mentioned. Most items will be dispatched the same or the next working day. Seller Inventory # wbb0013029066

Book Description Casemate, 2013. Condition: Good. A+ Customer service! Satisfaction Guaranteed! Book is in Used-Good condition. Pages and cover are clean and intact. Used items may not include supplementary materials such as CDs or access codes. May show signs of minor shelf wear and contain limited notes and highlighting. Seller Inventory # 161200167X-2-4