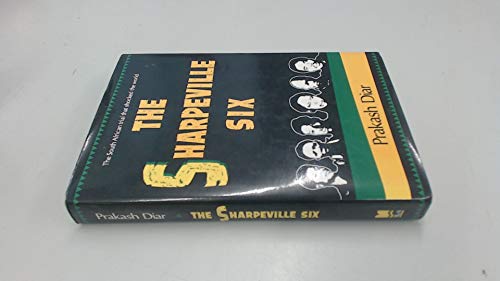 Hardback. Price clipped. The South African trial that shocked the world. This is the behind-the-scenes story of the five men and one woman who embody the tragedy of the law in the service of apartheid. The Six - ordinary non-political blacks - were sentencded to hag for a murder even the presiding judge acknowledges they did not commit. Their story is told by Prakash Diar, the defence attorney in the case. Through the words and testimony of the participants Diar exposes how justice miscarried, favouring state power over individual freedom. 321 pp. Size: 8vo - over 7¾" - 9¾" tall. Bookseller Inventory # 061727

1. THE SHARPEVILLE SIX The South African trial that shocked the world

Book Description McClelland & Stewart (Toronto), 1990. Hardcover / Hardback. Condition: Fine. Dust Jacket Condition: Fine. First edition. Hardback. This is the behind-the-scenes story of the 5 men and 1 woman who embodied the tragedy of the law in the service of apartheid. The Six-ordinary, non-political blacks - were sentenced to hang for a murder even the presiding judge acknowledged they did not commit. Their story is told by Prakash Diar, the defence attorney in the case. Through the words and testimony of the participants the author exposes how justice miscarried, favouring state power over individual freedom. The Six were not the last South Africans to be punished by the Courts for crimes they did not commit. Yet, from the moment of their conviction, The Six became the focus of protests around the world. The perversion of justice that allowed - and upheld - their conviction made rational, peaceful change in South African more difficult. As the television cameras of the world rolled, South African authorities released Nelson Mandela and unbanned the organisation that spoke for the majority of black South Africans. Then began the long process of negotiating with the government on behalf of all those who, like The Sharpeville Six, were imprisoned to keep apartheid strong. Illus., Notes, Chronology, Principal Characters. 321pp. 8vo. h/back. From the library of true crime writer, Wilfred Gregg, with his personal b/plate. F. in F. dw. Seller Inventory # 16003

4. THE SHARPEVILLE SIX The South African Trial That Shocked the World

Book Description McLelland & Stewart Inc, Toronto, 1990. Hardback. Condition: Fine. Dust Jacket Condition: Fine. First Edition. This fine unread copy is bound in cloth covered boards with bright gilt titling to the spine, tight, white, bright and square. The unclipped dust wrapper is in fine condition. International postal rates are calculated on a book weighing 1 Kilo, in cases where the book weighs less then postage will be reduced accordingly. Where the book weighs more than 1 Kilo increased charges will be quoted. The Sharpeville Six were six South African protesters convicted of the murder of Deputy Mayor of Sharpeville, Kuzwayo Jacob Dlamini, and sentenced to death. On September 3, 1984, a protest march in Sharpeville turned violent (some of the crowd threw stones at Dlamimi's house, he responded by firing a gun and a riot ensued and the Deputy Mayor was murdered. Mojalefa Sefatsa, Theresa Ramashamola, Reid Mokoena, Oupa Diniso, Duma Khumalo and Francis Don Mokhesi were arrested in the following months, found guilty of murder under the "Common purpose" doctrine and sentenced to death by hanging on December 12, 1985. Christian Mokubung and Gideon Mokone were also sentenced to eight years in prison. All were represented by lawyer Prakash Diar, the author of this book. The convictions were widely condemned by the international community as unlawful and racist, particularly in United Nations Security Council Resolution 610 and 615. Two jurists reviewing the case said it was a "crime against humanity". Within the South African legal community opinion was mixed. A poll by The Star of eleven law professors showed that five were supportive of the execution, while six were not of the six who were not, four raised the prospect of legal reforms and the remaining two remarked the case "smacks of simple vengeance". One professor was dispatched to London to defend the South African government's position on the matter. However, at a press conference, he stated he had not read the trial record but insisted that there had been no miscarriage of justice and "all arguments had been heard" Ref S6 Size: 322pp. Seller Inventory # 017925

6. The Sharpeville Six - the South African Trial That Shocked the World