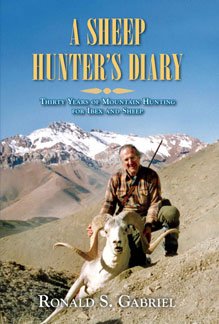 Synopsis: Dr. Ronald Gabriel is in ultra-rare company, for he is one of only a few dozen people who have taken a Super Slam of sheep. While doing so, this very selective hunter has shot some fantastic heads. These include such trophies as the No. 2 blue sheep, a 60-inch Altai argali, a 60-inch Marco Polo, a 180-point-plus desert sheep, and a No. 2 West Caucasian tur. This man is no amateur hunter! You will find very little in the form of measurements and boasting in this book, but rather you will discover a wonderful, dense narrative of interesting events that will take you from the top of the Himalayas to the bottom of a Baja California canyon (almost at sea level). This book stands in lavish counterpoint to his adventurous exploits. Ron Gabriel has done the most to illustrate his experiences by commissioning Gordon Allen, a famous outdoor artist, to make specific drawings for each chapter of this book. These illustrations are so evocative of the setting and animals that the reader is completely drawn into the tale. Combined with his wonderful color photos and superb narrative, this is one very fine sheep-hunting tome. His adventures are juxtaposed against those of earlier explorers such a Demidoff, Dunmore, Cobbold, Cumberland, and Sheldon. Gabriel does an admirable job of describing how these famous hunters fared in their own hunting over a century ago on the same grounds. Material for a superlative sheep-hunting book like this is not the result of experiences over ten or not even over twenty years, but rather must come from a lifetime of hunting on the mountains of the world. The individual must be extraordinarily dedicated and focused-a hunter who forgoes all other more normal game animals in order to achieve his hunting goals. And that is why we only publish a book on the subject a few times each decade. The individuals who can accomplish what Ron Gabriel has done are few and far between, and there simply are not many manuscripts worthy to be included in our lineup.

About the Author: Ron Gabriel began hunting as a six-year-old with his grandfather and father. He frequently ditched school as a young teenager to hunt game birds, rabbits, and squirrels in the San Gabriel Mountains in his native Southern California. Beginning in the early 1970s and continuing for more than three decades, he has pursued the wild sheep and ibex of the world, a consuming avocation. This hunter has taken more than four dozen expeditions in the high, windswept mountains of the world, which he calls God s stupendous geological creation. Ron Gabriel is a graduate of Yale University in philosophy (1959). Ron's professional vocation is that of a pediatric neurologist. He is now a clinical professor emeritus in neurology and pediatrics at UCLA's School of Medicine where he taught for forty-five years. He is certified by the American Boards of Neurology and Pediatrics and certified as a Pediatric Neuroimager by the American Society of Neuroimaging. Currently he takes care of children with neurological disorders. He coauthored the Textbook of Child Neurology for the first four editions and has authored many other professional publications. In addition to writing for various outdoor magazines, he is the author of American & British 410 Shotguns, a definitive treatment of the 410 bore. His recent published essays on Hunt Ethics have generated a reconsideration of the difference between collecting and hunting. Ron Gabriel enjoys the company of a large family in Southern California and the world of ideas.

Book Description Safari Press, 2014. Hardcover. Condition: GOOD. Has little wear to the cover and pages. Contains some markings such as highlighting and writing. Seller Inventory # 1571574158_abe_gd