Items related to Sicily's Rebellion Against King Charles: The Story... 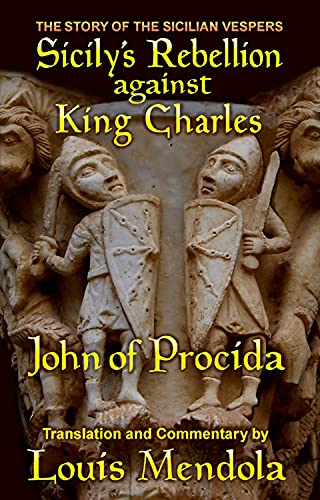 Sicily's Rebellion Against King Charles: The Story of the Sicilian Vespers

This is a translation of the memoir of John of Procida written as a chronicle in Middle Sicilian around 1290 as Lu Rebellamentu di Sichilia contra Re Carlu, with accompanying commentary by one of Sicily's leading historians.

The chronicle of John of Procida brings us the spy story, the swashbuckler, the wartime saga and the morality play in a work that transcends any single genre. For historians, the chronicle is a key source in the study of the Sicilian Vespers uprising of 1282, an event that changed the course of European and Mediterranean history.

It is also the earliest known narrative prose (rather than poetry) in a vernacular Italian language, pre-dating by decades the first works of this kind written in Tuscan. Most medieval chronicles were written in Latin, but this one was meant for ordinary people. Middle Sicilian is the language that was spoken in Sicily, southern Calabria and parts of Apulia until around 1370. (So little has ever been published in English about this medieval tongue that, until now, it was rarely even identified by a specific name, yet it differs from modern Sicilian almost as much as Chaucer's English differs from what is spoken today.) This chronicle is the longest work in Middle Sicilian to find its way into English translation.

John of Procida was a leader of the revolt that sparked the war of 1282. The chronicle recounts his efforts to plan the fall of King Charles I of Naples, culminating in the monarch's loss of Sicily.

Largely overlooked until now, this most remarkable chronicle offers us timeless lessons that transcend languages and centuries. Issues like achieving justice for rape victims (Procida's daughter) leap from its pages.

Presented by the author of some of the most readable histories of Sicily, the telling of Procida's story in these pages never lacks for style. Mendola's translation, while faithful to the medieval manuscript, makes for an interesting read. Indeed, the chronicle has been suggested as an early example of what today is known as narrative journalism, or creative nonfiction.

Useful to students of literature as well as those studying medieval history, the book also includes the original Middle Sicilian text (with a glossary), a chronology, 5 pages of genealogical tables, 10 pages of clear maps, concise biographies of persons mentioned in the narrative, an engaging prologue, an introductory chapter setting forth the history of the Kingdom of Sicily up to the time the chronicle begins, heraldic information, and dozens of photographs of historical sites in Sicily, Aragon and Catalonia. It presents notes on the Sicilian language and the background of the chronicle and its manuscripts.

Based largely on original research, the commentary is the lengthiest examination of the chronicle ever published in English. Not only is Mendola familiar with the history of the Vespers and the Mediterranean, his knowledge of medieval Romance languages shines as he cites examples in Catalan, Norman-French, Italian and Sicilian, along with Latin. His research in contemporary sources (like the royal decrees of King Peter III from 1282 conserved in Barcelona) reveals that the telling of Procida's adventures, despite the obvious fictionalizing of certain details, relies overwhelmingly on historical facts.

The Middle Sicilian text is the first complete transcription of the Spinelli Codex, the chronicle's earliest surviving manuscript, to feature clear quotations and orthography (for example the letters U and V are clearly distinguished). The Spinelli Codex itself came to light only in the nineteenth century.

Among the extensive supplementary material included is Ciullo of Alcamo's poem The Dialogue (il Contrasto) with an English translation; composed before 1240, this is the longest complete work in an Italian language known to survive from the reign of Frederick II. It is the lengthiest poem of the Sicilian School and a classic of the courtly romantic genre of its era.

There is enough material in this book to make it a useful study guide on the War of the Vespers, and a fine introduction to two of the most important works in the Middle Sicilian canon. Lou Mendola, whose first scholarly article dealing with the Sicilian Vespers was published in an academic journal in 1985, is intimately familiar with Sicily, Calabria, Aragon and Catalonia, the regions that are the story's focus. Research for this book was conducted in Italy, Spain and the Vatican. Considering the knowledge of history and languages required to bring this work to us, Mendola is one of just a few people in the world who could have written it.

Destined to become a literary and historical reference, this book will appeal to scholars as well as casual readers interested in the kinds of sources consulted in the writing of history. Its appeal will be found on every level. Whether the reader's interest is 13th-century history, medieval storytelling, the expressive language once spoken in southern Italy, the chronicle's unique literary form, or its timely message, it will be found in these 328 pages.

The chronicle is a singular work. Its publication in English, after seven centuries, is a milestone in the study of medieval European literature.

Louis Mendola is one of Sicily’s foremost medievalists, and one of the very few whose work is known beyond Italian borders. His first scholarly paper (on the Battle of Benevento of 1266) was published in 1985; others consider such topics as the history of the medieval Normans in Sicily. He wrote the first book covering the entire seven-century history of the Kingdom of Sicily, and the first English translations of two chronicles of the thirteenth century. Having researched in Italy, Britain, Spain, Germany, France and the Vatican, he has been consulted by The History Channel, the BBC and The New York Times. Read by millions internationally, his online articles have made him one of the most popular Sicilian historians of the present century.