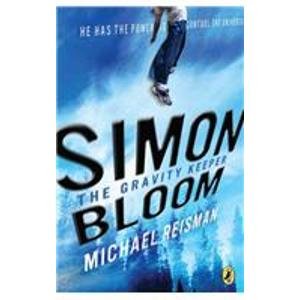 Ordinary sixth-grader Simon Bloom has just made the biggest discovery since gravity–and it literally fell into his lap. Or onto his head, anyway. You see, Simon has found the Teacher’s Edition of Physics, a magical reference book containing the very formulas that control the laws that govern the universe! By reciting the formulas out loud, he’s able to do the impossible–like reverse the force of gravity to float weightlessly, and reduce friction to zoom across any surface!

But a book that powerful isn’t safe with Simon for long. Before he knows it, he is being pursued by evil forces bent on gaining control of the formulas. And they’ll do anything to retrieve them. Now, Simon and his friends must use their wits and the magic of science in a galactic battle for the book, and the future of the universe, in this funny, fast-paced science fiction adventure from first-time author Michael Reisman.

Michael Reisman was born and raised in Fair Lawn, New Jersey, where he spent a lot of time daydreaming in nearby woods. He can juggle and can use chopsticks with either hand, but he cannot control the universe (not for lack of trying). He’s got a black belt in napping; he loves pizza, chocolate, and NY egg rolls; and he enjoys writing about himself in the third person. His many jobs have included making smoothies, washing tents, and working in the movie/TV industry, but he’s happiest sitting in cafés and thinking up strange stories. He currently lives in Los Angeles, California, and doesn’t have a dog–yet. This is his first novel.