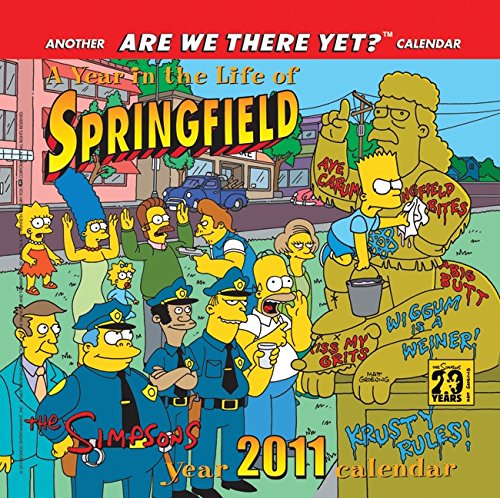 The editors at Are We There Yet?™ Calendars bring you another "Year in the Life" of one of America's favorite cities. In the past, you've met the citizens of Ogdenville and Crackton, now visit the residents of Springfield -- unfairly dubbed "America's crudbucket." Judge for yourself as you witness the people of this humble hamlet at work and at play, both day and night. It's one year so full of fun, you'll want to take it in a month at a time!

Matt Groening, the creator and executive producer of the Emmy® Award-winning series The Simpsons, as well as creator of the cartoon strip "Life in Hell" and the animated FOX television series Futurama, is the man responsible for bringing animation back to primetime and creating an immortal nuclear family. In addition, Groening formed Bongo Comics Group in 1993 and currently serves as publisher of The Simpsons Library of Wisdom, Simpsons Episode Guides, Simpsons Comics, Bart Simpson Comics, Radioactive Man Comics, Simpsons Comics Treasure Trove, the annual Bart Simpson's Treehouse of Horror, Futurama Comics and more than 36 comic compilations, as well as many instant classics including Bart Simpsons Guide to Life, The Simpsons Handbook and The Simpsons Uncensored Family Album.