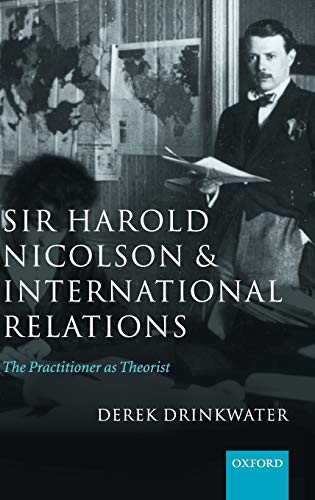 Sir Harold Nicolson and International Relations: The Practitioner As Theorist

Synopsis: This is a major new study of the international thought of Sir Harold Nicolson (1886-1968), one of the most prominent commentators on diplomacy, international order, and world peace of his day, and an anti-appeasement MP. This meticulously researched work will stand for many years as the definitive guide to Nicolson's contribution to the theory and practice of international relations. It also establishes a place for him in the pantheon of key British international thinkers of the twentieth century.

About the Author: Derek Drinkwater is at Visiting Fellow, Department of International relations, The Australian National University.

1. Sir Harold Nicolson and International Relations: The Practitioner As Theorist

Book Description Oxford University Press, USA, 2005. Condition: Good. Former Library book. Shows some signs of wear, and may have some markings on the inside. Seller Inventory # GRP107653970

3. Sir Harold Nicolson and International Relations: The Practitioner as Theorist

Book Description Oxford University Press, 2005. Condition: Good. This is an ex-library book and may have the usual library/used-book markings inside.This book has hardback covers. In good all round condition. No dust jacket. Seller Inventory # 8073308

4. Sir Harold Nicolson and International Relations: The Practitioner As Theorist

Book Description Oxford University Press, 2005. Condition: Good. A+ Customer service! Satisfaction Guaranteed! Book is in Used-Good condition. Pages and cover are clean and intact. Used items may not include supplementary materials such as CDs or access codes. May show signs of minor shelf wear and contain limited notes and highlighting. Seller Inventory # 0199273855-2-4

5. Sir Harold Nicolson and International Relations: The Practitioner As Theorist

Book Description Oxford University Press, United Kingdom, 2005. Hardback. Condition: New. New. Language: English. Brand new Book. Sir Harold Nicolson (1886-1968) is well known as a diarist, man of letters, diplomatic historian, gardener, and broadcaster. Nicolson's bestselling diaries and letters, his many biographies, including the highly acclaimed official life of King George V, and his numerous essays and broadcasts have made him, in the words of his friend and fellow MP Robert Bernays, an international figure of the 'second degree'. Yet there was more to this urbane man than his finely observed diary, stylish writing, and Sissinghurst Castle Garden in Kent, the joint creation of Nicolson and his wife, the writer V. Sackville-West. He also produced a rich and ambitious corpus of writing on the theory and practice of international relations. Nicolson's aristocratic background and upbringing in a diplomatic household, followed by an Oxford classical education and twenty years in diplomacy, combined to forge his distinctivephilosophy of international affairs. As a young attache in Constantinople before the Great War, and in Whitehall during the conflict, at the Paris Peace Conference of 1919, and en poste in Persia and Germany throughout the 1920s, Nicolson was ideally placed to observe the maelstrom of internationalpolitics. As an anti-appeasement and wartime MP (1935-1945), he became a highly regarded authority on international relations. During and after World War II, he turned his mind to the issues of European integration, world government, and the ultimate possibility of global peace. Nicolson has been the subject of two fine biographies. This is the first study of his contribution to international thought. He emerges from it as an important international thinker, alongside theorists as diverse as E. H. Carr and Leonard Woolf. Nicolson's international thought contains elements of realism and idealism, while retaining a distinctive character and a breadth and consistency that render it unique. Seller Inventory # LHB9780199273850