Items related to Slavery in Florida: Territorial Days to Emancipation 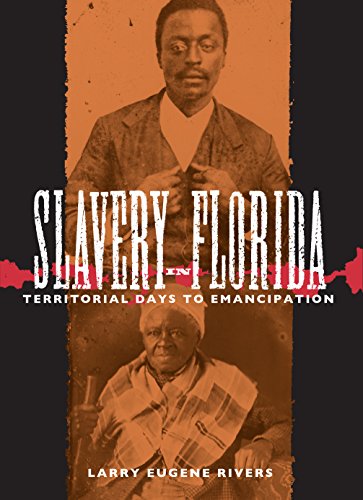 "This is the definitive account of slavery in Florida. It covers all aspects of the institution and the lives of those who were its victims. Especially revealing are its thorough examination of the slave family and its detailed account of the relations between black slaves and Seminole Indians. I know of no other state study that does as much so well."--George M. Fredrickson, Edgar E. Robinson Professor, Stanford University

"Applying the results of extensive research in the primary and secondary sources to a broad conceptual framework, Larry E. Rivers has written a comprehensive social history of slavery in Florida."--Jerrell H. Shofner, Professor of History Emeritus, University of Central Florida

"A highly significant study. . . . Rivers has brought Florida up to date in the field of American slavery. This study, well-written and based on a variety of sources, is balanced and informative."—William W. Rogers, professor emeritus of history, Florida State University

"Rivers has filled a tragically neglected gap in Florida’s published history. The evolution and complexities of slavery unfold from an easily readable narrative in a manner that will move the reader and shed new light on a key element of southern and African American history."—Canter Brown, Jr., historian in residence, Tampa Bay History Center

This important illustrated social history of slavery tells what life was like for bond servants in Florida from 1821 to 1865, offering new insights from the perspective of both slave and master.

Starting with an overview of the institution as it evolved during the Spanish and English periods, Larry E. Rivers looks in detail and in depth at the slave experience, noting the characteristics of slavery in the Middle Florida plantation belt (the more traditional slave-based, cotton-growing economy and society) as distinct from East and West Florida (which maintained some attitudes and traditions of Spain). He examines the slave family, religion, resistance activity, slaves’ participation in the Civil War, and their social interactions with whites, Indians, other slaves, and masters.

Rivers also provides a dramatic account of the hundreds of armed free blacks and runaways among the Seminole, Creek, and Mikasuki Indians on the peninsula, whose presence created tensions leading to the great slave rebellion, the Second Seminole War (1835-42).

Slavery in Florida is built upon painstaking research into virtually every source available on the subject--a wealth of historic documents, personal papers, slave testimonies, and census and newspaper reports. This serious critical work strikes a balance between the factual and the interpretive. It will be significant to all readers interested in slavery, the Civil War, the African American experience, and Florida and southern U.S. history, and it could serve as a comprehensive resource for secondary school teachers and students.

Larry Eugene Rivers, President of Fort Valley State College and professor of history, is the author of numerous works, and the recipient of the Arthur W. Thompson Award from the Florida Historical Society and the Carter G. Woodson Award from the Association for the Study of African American Life and History.

"A thoroughly researched and balanced account of the slave experience in Florida."--Journal of American History

"The greater social and economic freedom born of Spanish influence and close relationships between rebellious blacks and Seminoles set the stage for the largest slave rebellion in U.S. history. A fascinating account of a variant experience of an institution too often viewed from a single perspective."--Booklist

"Rivers takes a very close look at slave society from various angles, as he evaluates not only slave life but the interaction of whites, blacks, and Indians. . . . Makes for a rich and multi-layered history."--Southern Historian

"Shows how slavery differed dramatically in different regions of the state and how, in fact, it evolved over the years in those areas."--Tallahassee Democrat

"Addresses how Florida’s history and geography produced conditions unlike those elsewhere in the American South."--Journal of Southern History