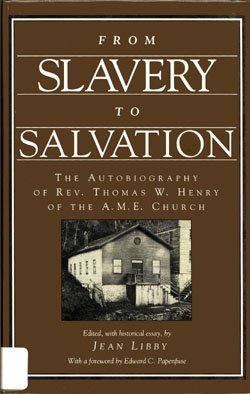 From Slavery to Salvation: The Autobiography of Rev. Thomas W. Henry of the A.M.E. Church

Synopsis: Thomas W. Henry was born a slave on a Maryland tobacco plantation in 1794. Until he was twenty-seven, when he was made free according to the slaveholder's will, he was an apprentice blacksmith. His wife Catherine and two of their children remained in bondage until he was able to purchase them. Two other children were lost to the slave trade.
This volume is a reprinting of Henry's memoirs, first published in 1872 by the African Methodist Episcopal Church. It provides a firsthand account of A.M.E. church politics and denominational relations, as well as a picture of community life as described by a manumitted slave.
This illuminating resource of information about America's black religious heritage conveys Henry's sense of mission and consecration as he ministered to the African Methodist Episcopal churches of Maryland and rural Pennsylvania. Because he spent his early life as a blacksmith, his descriptions of the slave community of the Antietam Ironworks are charged with understanding and authority. His account is an unparalleled primary source for the study of the slave's role in the social history of the iron industry. As Henry documents the harsh economics of life in a free black family, he reveals the changing nature of American slavery in the early nineteenth century as well as the growing hostility of European workers toward the skill of slaves.
Henry's autobiography, prepared for publication in this edition from a rare copy in the Moorland-Spingarn Research Center at Howard University, documents the role of this religious and community mentor and sheds additional light on the history of black leadership in the quest for abolition.

From Library Journal: Libby, a research librarian at the University of California, San Francisco, edited this autobiography of an African American minister. Born a slave, Henry worked as a blacksmith before serving as a minister in the Methodist and then later the A.M.E. [African Methodist Episcopal] Church. His remembrances offer a firsthand account of church politics, of life in the Maryland iron industry, and of economic and social conditions for blacks in antebellum America. He also offers noteworthy observations on the changing attitudes of whites toward African Americans in mid-19th-century America. Recommended for academic libraries and for all libraries with Civil War collections.
Patricia Owens, Wabash Valley Coll., Mt. Carmel, Ill.
Copyright 1994 Reed Business Information, Inc.

1. From Slavery to Salvation: The Autobiography of Rev. Thomas W. Henry of the A.M.E. Church

Book Description Univ Pr of Mississippi (Txt), 1994. Condition: Good. Reprint. Ships from the UK. Former Library book. Shows some signs of wear, and may have some markings on the inside. Seller Inventory # GRP102267592

2. From Slavery to Salvation: The Autobiography of Rev. Thomas W. Henry of the A.M.E. Church

Book Description Univ Pr of Mississippi, 1994. Hardcover. Condition: GOOD. Has little wear to the cover and pages. Contains some markings such as highlighting and writing. Seller Inventory # 0878056904_abe_gd

3. From Slavery to Salvation: The Autobiography of Rev. Thomas W. Henry of the A.M.E. Church

Book Description Univ Pr of Mississippi, 1994. Condition: Good. A+ Customer service! Satisfaction Guaranteed! Book is in Used-Good condition. Pages and cover are clean and intact. Used items may not include supplementary materials such as CDs or access codes. May show signs of minor shelf wear and contain limited notes and highlighting. Seller Inventory # 0878056904-2-4

4. From Slavery to Salvation: The Autobiography of Rev. Thomas W. Henry of the A.M.E. Church

Book Description Univ Pr of Mississippi, 1994. Hardcover. Condition: NEW. Dust Jacket Condition: NEW. First Edition. 1st EDITION, still in original shrink wrap. This copy is NEW; the text is clear, bright, and unmarked; binding is tight. Stated first edition. The jacket is also new: absolutely intact in all ways, including perfect color and design. We have a five star rating because of our fulfilment success and because our descriptions are accurate. We guarantee: NO NASTY SURPRISES. Hardcover. Seller Inventory # 010923

5. From Slavery to Salvation: The Autobiography of Rev. Thomas W. Henry of the A.M.E. Church

6. From Slavery to Salvation: The Autobiography of Rev. Thomas W. Henry of the A.M.E. Church