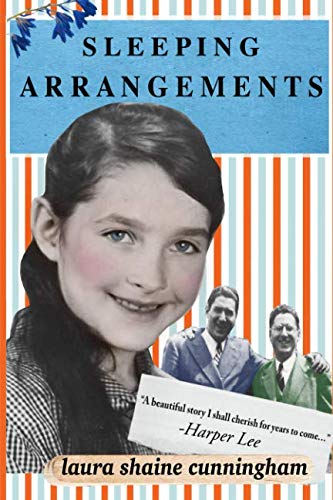 Synopsis: memoir of a girl orphaned at 8, raised by two bachelor uncles in the Bronx. Harper Lee said "a beautiful story I will cherish for years to come" ... hailed in the New York Times as "a model memoir, funny and sad, irreverent and generous." Excerpted in The New Yorker magazine and praised by critics and authors. Anne Tyler called it "a truly wonderful book." People magazine said:"The kind of book you buy multiple copies of to send to your mother and best friends." From the Los Angeles Times: "Loving and witty memoir...Compassion and wit are a rare literary combination, but Sleeping Arrangements is illuminated by both." The Seattle Times:"Enchanting...superbly funny." Chaim Potok wrote:"Wise, sobering and witty." Muriel Spark wrote:"A Great pleasure"

About the Author: Laura Shaine Cunningham is an author, playwright and journalist. Ms.Cunningham’s fiction and non-fiction have appeared in The New Yorker, The Atlantic Monthly, and the New York Times, and the London Times. Her memoir, SLEEPING ARRANGEMENTS, has been hailed as a modern classic, by Michiko Kakutani “A model memoir”. Her memoir A PLACE IN THE COUNTRY was featured as a New York Times Notable Book. SLEEPING ARRANGEMENTS, also memoir, is now in its 20th printing, in the United States. Her novel BEAUTIFUL BODIES leads a dual life as a play and a novel. She is widely sought as a speaker and professor of creative writing, memoir and dramatic writing. Among the many awards she has won are two NEA grants (in creative non fiction and theater) and two NYFA awards in literature and theater. She was also the recipient of a Yaddo fellowship.

Book Description MEMOIR HOUSE. Paperback. Condition: Very Good. A copy that has been read, but remains in excellent condition. Pages are intact and are not marred by notes or highlighting, but may contain a neat previous owner name. The spine remains undamaged. At ThriftBooks, our motto is: Read More, Spend Less. Seller Inventory # G0998826413I4N00

Book Description MEMOIR HOUSE, 2017. Condition: Good. A+ Customer service! Satisfaction Guaranteed! Book is in Used-Good condition. Pages and cover are clean and intact. Used items may not include supplementary materials such as CDs or access codes. May show signs of minor shelf wear and contain limited notes and highlighting. Seller Inventory # 0998826413-2-4

Book Description MEMOIR HOUSE, 2017. Paperback. Condition: VERY GOOD. Pages are intact and are not marred by notes or highlighting, but may contain a neat previous owner name. The spine remains undamaged. Supplemental materials are not guaranteed with any used book purchases. Seller Inventory # 0998826413_abe_vg

Book Description MEMOIR HOUSE, 2017. Paperback. Condition: GOOD. Has little wear to the cover and pages. Contains some markings such as highlighting and writing. Supplemental materials are not guaranteed with any used book purchases. Seller Inventory # 0998826413_abe_gd