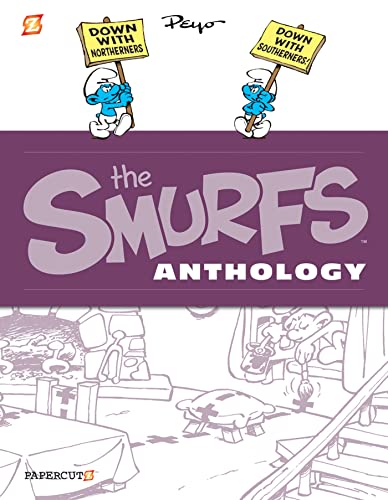 Synopsis: Smurf vs. Smurf and Smurf Soup get the Anthology treatment! While Papa Smurf works in his laboratory, two Smurfs begin arguing about the proper use of the word "smurf." Smurfs that live in the northern part of the village use it as a verb (as in "bottle smurfer"), while the southerners use it as a noun (as in "smurf opener"). Without Papa Smurf around to calm things down, the argument quickly escalates until the northern and southern smurfs divide themselves along the village lines! Plus, another never-before-seen Johan & Peewit comic, featuring the Smurfs!

About the Author: PIERRE CULLIFORD, born in Belgium in 1928, was the cartoonist known as Peyo. After leaving school in Brussels, he looked for a job and found two that caught his eye: dental assistant and illustrator. After arriving 15 minutes late for the dental assistant job, he was left with only one option! Peyo quickly found himself working with some of Belgium's most talented cartoonists, including his lifelong writing partner Yvan Delporte. He eventually got the break he deserved when he started working for Le Journal de Spirou. Johan and Peewit were among his most popular characters. In 1958, The Smurfs made their first appearance and went on to become the world-famous characters we know and love today.

Book Description Papercutz, 2017. Hardcover. Condition: Good. Connecting readers with great books since 1972. Used books may not include companion materials, some shelf wear, may contain highlighting/notes, may not include cdrom or access codes. Customer service is our top priority!. Seller Inventory # S_273139507

Book Description Papercutz, 2017. Hardcover. Condition: Good. Connecting readers with great books since 1972. Used books may not include companion materials, some shelf wear, may contain highlighting/notes, may not include cdrom or access codes. Customer service is our top priority!. Seller Inventory # S_272010525

Book Description NBM/Papercutz, 2017. Condition: Good. Ships from Reno, NV. Former Library book. Shows some signs of wear, and may have some markings on the inside. Seller Inventory # GRP117104694

Book Description Papercutz. Hardcover. Condition: Good. A copy that has been read, but remains in clean condition. All pages are intact, and the cover is intact. The spine may show signs of wear. Pages can include limited notes and highlighting, and the copy can include previous owner inscriptions. At ThriftBooks, our motto is: Read More, Spend Less. Seller Inventory # G1629912921I3N00