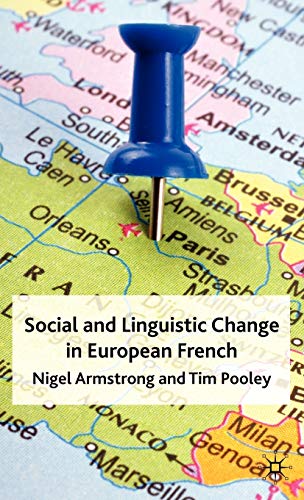 Synopsis: An in depth examination of linguistic variation and change as a reflection of social convergence in the major French-speaking countries of Europe - France, Belgium and Switzerland. Considered in the context of linguistic levelling the book provides a detailed account of recent social and linguistic change in European French.

About the Author: NIGEL ARMSTRONG teaches French and linguistics at the University of Leeds, UK. Current research projects focus on social, regional and stylistic variation in French, as well as translation. His publications include Social and Stylistic Variation in Spoken French (2001) and Translation, Linguistics, Culture (2005)

TIM POOLEY. After a career spanning 30 years teaching French and linguistics at London Metropolitan University (in its various guises) Tim is now an independent researcher, whose main interests are sociolinguistics variation and minority languages in francophone Europe. His publications include Chtimi (1996) and Language, Dialect and Identity in Lille (2004)

Book Description Palgrave Macmillan. Hardcover. Condition: As New. An apparently unread copy in perfect condition. Dust cover is intact; pages are clean and are not marred by notes or folds of any kind. At ThriftBooks, our motto is: Read More, Spend Less. Seller Inventory # G0230219500I2N00

Book Description Palgrave Macmillan, 2010. Condition: Good. A+ Customer service! Satisfaction Guaranteed! Book is in Used-Good condition. Pages and cover are clean and intact. Used items may not include supplementary materials such as CDs or access codes. May show signs of minor shelf wear and contain limited notes and highlighting. Seller Inventory # 0230219500-2-4