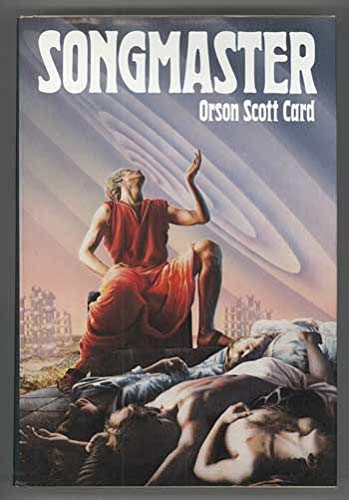 An SF classic from the author of Ender's Game.

Kidnapped at an early age, the young singer Ansset has been raised in isolation at the mystical retreat called the Songhouse. His life has been filled with music, and having only songs for companions, he develops a voice that is unlike any heard before. Ansset's voice is both a blessing and a curse, for the young Songbird can reflect all the hopes and fears his auidence feels and, by magnifying their emotions, use his voice to heal--or to destroy. When it is discovered that his is the voice that the Emperor has waited decades for, Ansset is summoned to the Imperial Palace on Old Earth. Many fates rest in Ansset's hands, and his songs will soon be put to the test: either to salve the troubled conscience of a conqueror, or drive him, and the universe, into mad chaos.

Songmaster is a haunting story of power and love--the tale of the man who would destroy everything he loves to preserve humanity's peace, and the boy who might just sing the world away.

Orson Scott Card is the author of the novels Ender's Game, Ender's Shadow, and Speaker for the Dead. Ender's Game and Speaker for the Dead both won Hugo and Nebula Awards, making Card the only author to win these two top prizes in consecutive years. There are seven other novels to date in The Ender Universe series. Card has also written fantasy: The Tales of Alvin Maker is a series of fantasy novels set in frontier America; his most recent novel, The Lost Gate, is a contemporary magical fantasy. Card has written many other stand-alone sf and fantasy novels, as well as movie tie-ins and games, and publishes an internet-based science fiction and fantasy magazine, Orson Scott Card's Intergalactic Medicine Show. Card was born in Washington and grew up in California, Arizona, and Utah. He served a mission for the LDS Church in Brazil in the early 1970s. Besides his writing, Card directs plays and teaches writing and literature at Southern Virginia University. He lives in Greensboro, North Carolina, with his wife, Kristine Allen Card, and youngest daughter, Zina Margaret.